After decades of serving as a vehicle of socialization at coffee shops, coffee moved into offices and homes with the introduction of instant coffee mixes. People went back out to coffee shops to get their java once Western-style takeout cafes were introduced and now coffee is coming back into the home with small, inexpensive espresso machines.

King Gojong allegedly became the first Korean to drink coffee in 1896 at the Russian legation in Seoul while evading the Japanese Army. Coffee became more commonplace through Japanese-style coffee shops during the colonial era.

After the 1950-53 Korean War, the industry took off. Coffee shops served as salons for businessmen in the postwar era, featuring attractive young women serving hot brew as men talked shop, and as gathering places for students and artists. By 1959, there were 3,000 coffee shops all over Korea, with a third of them in Seoul.

When Dongsuh Foods came out with the first-ever three-in-one -- coffee, sugar and powdered cream -- mix sticks in 1976, it moved coffee into the home and office.

The world‘s first coffee mix from Dongsuh Foods, released in 1976 (Dongsuh Foods)
With ingredients combined in just the right proportions, it was easy and inexpensive for Koreans to enjoy coffee anywhere, anytime -- and after the 1997 financial crisis, instant coffee became a staple in offices as companies downsized on secretarial staff.

According to Dongsuh Foods, “instant coffee’s convenience and marketing helped it to dominate the coffee market, and Korea became the largest consumer of instant coffee in the world” during this period.

The culture shifted again in 1999 with the introduction of Starbucks. Retail giant Shinsegae introduced the US-based brand to Korea with the first location in front of Ewha Womans University, and the culture of takeout espresso coffee took off. Other takeout brands such as Coffee Bean and Tea Leaf, as well as homegrown brands such as Hollys Coffee, A Twosome Place and Ediya followed. 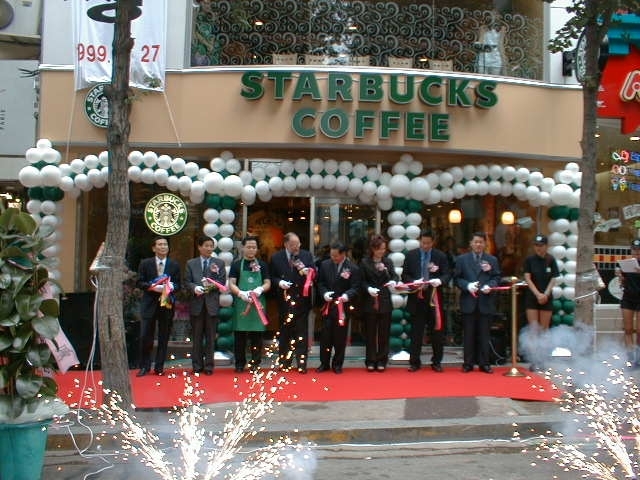 Now, capsule coffee machine makers are hoping to capture the market of consumers who want to enjoy espresso coffee at home or in the office, in place of the sugar three-in-one mixes. Capsule coffee makers work by creating espresso from small sealed pods filled with pre-roasted and ground coffee.

Capsule coffee machines were first introduced to the market here in December 2007, when Nestle launched its Nespresso line here. Other foreign brands such as Miele soon jumped into the fray joined in competition by Korean companies like Namyang Dairy Products and Maeil.

In 2015, capsule coffee maker Nescafe Dolce Gusto commissioned a survey of women aged 25-44 all over the country about their coffee consumption at work. More than 63 percent of women answered that they drank roasted and ground coffee at work, with 55 percent saying they drank capsule coffee. 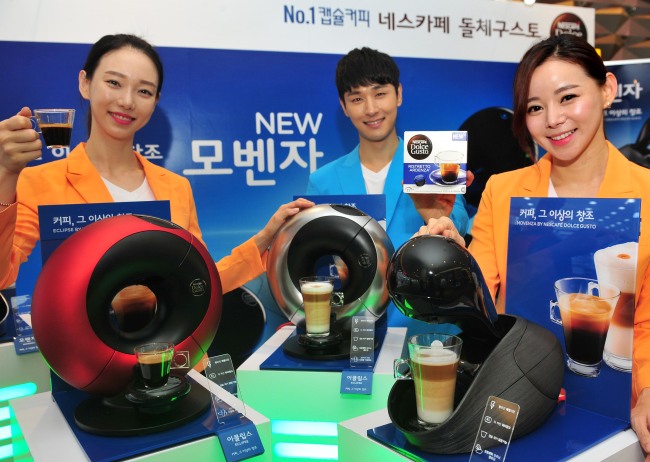 “I truly believe that once Korean consumers really understand the system and really experience it on their own, they’ll understand the advantage of having the system,” she told reporters at a press conference this year.

It seems coffee is not the only way that Koreans get their caffeine fix. Highly caffeinated beverages including teas, soft drinks and energy drinks all sell well here, to the point where some are now describing themselves freely as caffeine addicts. Even without drinking coffee, having other alternatives such as energy drinks could easily tip one’s diet beyond the recommended amount of daily caffeine intake, warns agencies such as the Korea Consumer Agency.