Less than one in 10 local SMEs have a record of shipping their goods abroad, according to data from the Small and Medium Business Administration. The amount of exports hovered below $100,000 for 40 percent of SME exporters. 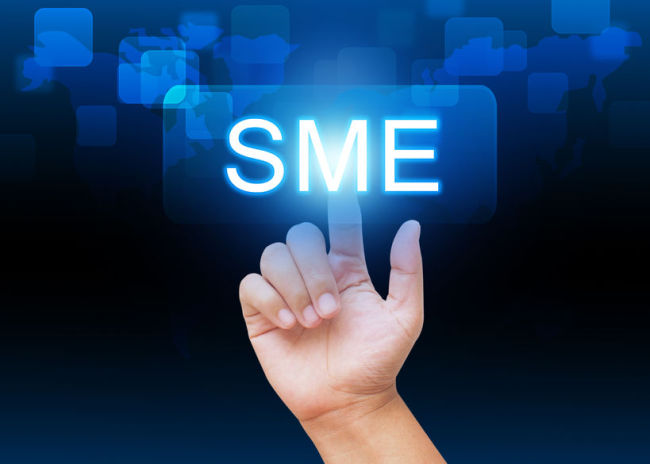 (123rf)
Park Sung-taek, chairman of the Korea Federation of SMEs, said there would be no future for the country’s small and midsized companies as long as they rely on domestic demand and remain as parts suppliers for large manufacturers. Excessive competition among small firms for limited shares of the domestic market undermines the efficiency of the economy.

Policies announced by the SMBA earlier this month focused on helping expand exports by small companies in cooperation with other relevant government agencies.

SMBA Minister Joo Young-sup expected outbound shipments by local SMEs and intermediary companies to amount $250 billion this year, accounting for half of the country’s total exports, up from 38 percent last year.

He said it was meaningless to differentiate between local and overseas markets as exports become a must, not a choice, for corporate growth.

Trade Ministry officials predict the country’s exports will rise 2.9 percent this year following two consecutive years of decline on the back of a recovery in advanced economies and big emerging markets around the world.

According to a recent survey of some 720 exporters and foreign importers of Korean products, conducted by the state-run Korea Trade-Investment Promotion Agency, Korea’s shipments abroad were projected to grow 3.4 percent on-year to $512.5 billion in 2017.

In a sign to back up such optimistic forecasts, the latest customs data showed the country’s exports jumped 25 percent from a year earlier in the first 20 days of this month.

Many experts, however, caution that external conditions for Korean exporters will be tougher in 2017 as US President Donald Trump carries out his protectionist policies and China steps up retaliatory measures against Seoul for its agreement to deploy an advanced US missile defense system here.

What is needed to overcome this unfavorable circumstance is to induce more companies, especially SMEs, to ship their goods to more diversified markets overseas, they say.

According to the Korea International Trade Association, only 2.6 percent of the country’s SMEs are engaged in exporting, while they account for 99 percent of manufacturing firms in Korea. The figure is far below 5.2 percent in the US, 9.7 percent in Germany and 10 percent in Canada. 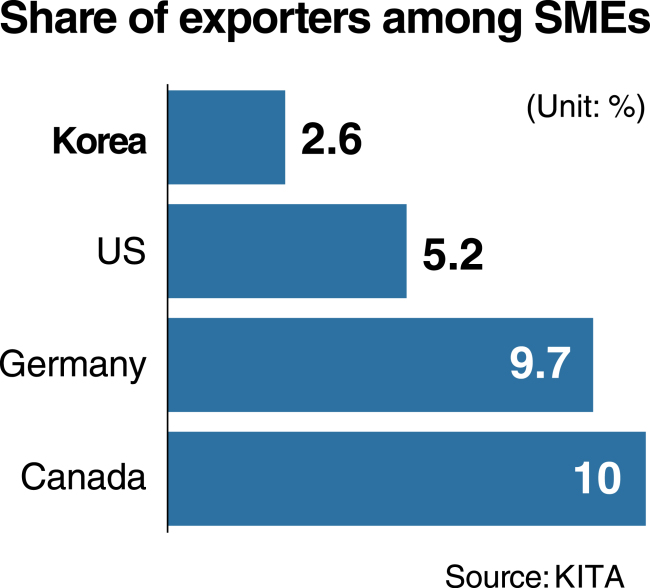 The government is pushing for a two-pronged strategy to nurture more SME exporters and help existing exporters continue to increase shipments abroad. As part of such efforts, the SMBA plans to expand financial support for research and development, guide foreign tourists to purchase products made by small firms at local traditional markets and provide more useful information on overseas markets by setting up more business centers in Southeast Asian and Latin American nations.

In parallel with strengthened policy support, experts indicate, small and midsized companies themselves should be more aggressive in finding opportunities to sell their products abroad.

“Local SMEs should change their long-held passive attitude toward tapping into overseas markets, if they are to survive the low-growth era,” said Jang Hyun-sook, a KITA researcher.

Jang said small and midsized companies can and should be encouraged by the success of some of their peers in advancing into global markets.

An exemplary case frequently touted by experts is a local maker of office chairs, which exported $5 million worth of products to about 40 countries last year. The company, Dawon Chairs, has annually invested 500 million won ($428,400) in global marketing since it set up a foreign operations team in 2012.

Experts also note local SMEs, especially producers of cosmetics and other consumer goods, may find greater opportunities for increasing sales abroad through global online markets, which are projected to expand from $304 billion in 2015 to $1 trillion by 2020.

Korea’s exports through e-commerce sites stood at about $100 million in 2015, accounting for less than 0.03 percent of the country’s overall outbound shipment of goods.

Industry officials say quick decision-making by SMEs is likely to give them advantages in online deals. But many small and midsized firms still face various obstacles to increasing exports through online markets as they are not sufficiently prepared for marketing, delivery and after-sales service.

In this regard, the government also needs to strengthen support for online exports by SMEs, experts say.