South Korea's online retail sales surged 18 percent on-year in 2016, government data showed Monday, as consumers increasingly enjoy Internet shopping in search of discounts amid a prolonged economic slump.
The Ministry of Trade, Industry and Energy said sales by 26 major retailers rose 8.5 percent. Their impressive performance amid the protracted economic slump was largely attributed to a robust growth in their online sales, which jumped 18.1 percent, compared with a 4.5 percent increase in offline sales. 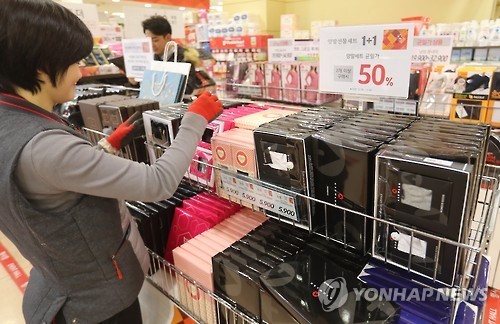 (Yonhap)
In online retailing, the sales growth rate of online marketplaces was the highest at 21.5 percent, followed by social commerce with 13.5 percent and online retail stores with 10.9 percent, the ministry said.

The growth rate in offline sales was lower than that of the online sector but was far higher than 1.9 percent in 2014 and 3.5 percent in 2015, due mainly to the strong growth of convenience stores and the hosting of international shopping festivals, the ministry noted.

Amid a steady increase in one-person households, convenience stores registered a double-digit growth of 18.1 percent, compared with a 3.3 percent increase for department stores.

By contrast, sales at large discount stores and super supermarkets fell by 1.4 percent and 0.8 percent, respectively.