Zhin Woong-Seob, governor of the Financial Supervisory Service, stressed that the fiscal, monetary and financial authorities are in close cooperation for risk management. 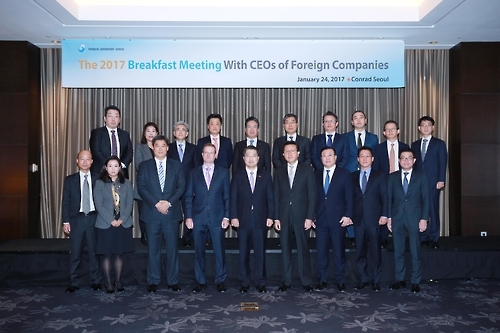 Zhin Woong-Seob (front row, center), governor of the Financial Supervisory Service, poses for a photo with heads of foreign investment firms in South Korea at a breakfast meeting in Seoul on Jan. 24, 2017, in a picture provided by the FSS. (Yonhap)
"The South Korean government and the financial authorities are swiftly responding to short- and long-term challenges," he said during a breakfast meeting with heads of foreign investment companies operating here.

Zhin cited the continued drop in credit default swaps premium on South Korea's sovereign bond to 44.71 basis points at the end of 2016 from 55.09 basis points half a year earlier and 56.13 basis points in late 2015.

He was apparently seeking to ease global investors' concerns about the possible impact on the economy from the months-long political turmoil involving the fate of President Park Geun-hye.

She was impeached by the National Assembly in early December for a bribery and abuse-of-power scandal. She is currently awaiting the Constitutional Court's final say amid speculation that the next presidential election, originally slated for December, may be held in the first half of this year.

Despite the political uncertainty, the FSS chief said the fundamentals of Asia's fourth-biggest economy remain strong.

On external risk factors especially from the U.S. and Europe, he mentioned a British proverb.

"A smooth sea never made a skillful sailor," he said, adding such challenges could "turn out to be a great opportunity for the financial investment industry to improve itself and grow further if the industry fully understands what the real economy wants from the capital market."

The FSS will "perform a full range of risk management in a preemptive manner, focusing its supervisory capacity on stabilizing financial markets," he said.

He vowed to step up efforts for South Korea's financial regulations to be on par with global standards.