The video recorded 100,016,111 views as of 8 p.m. on Saturday, more than eight months after it was uploaded on the global free video sharing site last May, according to Big Hit Entertainment.

“Fire” is the title track off “Epilogue: Young Forever,” the group’s first compilation album. The song’s video was No. 3 on YouTube’s 2016 list for the world’s most-viewed K-pop music videos.

BTS, also known as Bangtan Boys, was the only Asian act recently nominated for the 9th Annual Shorty Awards which honor the best content creators and producers on social media. Among other nominees in the music category were big-name stars such as Drake, Chance The Rapper, Ariana Grande and Britney Spears. 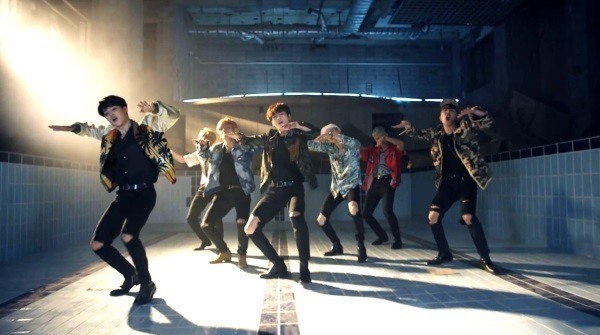 BTS (Big Hit Entertainment)
The awards organizers introduced BTS as a seven-member boy band that is “perhaps the most famous K-pop group in the world.”

“Besides their catchy tunes and boyish good looks, BTS has got a strong Instagram presence with their concept photo sessions,” they said on the awards’ website.

Online voting for the Shorty Awards is currently under way on the awards’ website and closes on Feb. 16. The awards ceremony is held in New York in every April.

Meanwhile, BTS and its management agency have donated 100 million won (US$85,034) for an association of bereaved families of the Sewol ferry disaster, according to an official with the agency.

The ferry sinking in 2014 claimed more than 300 lives, most of whom were high school students on a field trip. (Yonhap)