Especially when most chiefs of Korean conglomerates are being probed by a team of special investigators on allegations that they colluded with the presidential office of Cheong Wa Dae for business favors, corporate Korea is losing its chance to build networks with US officials under the new Trump administration, observers say. 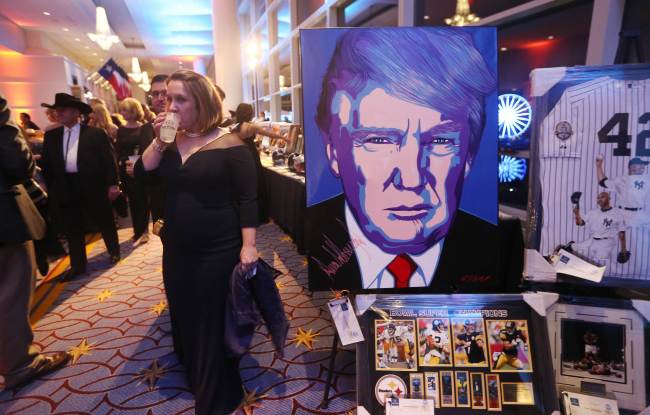 Revelers attend the Texas Black Tie and Boots inaugural ball on Thursday in National Harbor, Maryland. (Mario Tama/Getty Images/AFP)
According to business circles in Seoul, Hanwha Group Chairman Kim Seung-youn, who was the only chaebol chief in Korea invited to Trump’s inauguration, decided to not fly to Washington DC due to health problems. The invitation was reportedly sent by Kim’s long-time friend Edwin Feulner, former president of the Heritage Foundation, who worked in Trump’s camp.

The absence of Korean business tycoons in the upcoming Trump inauguration is in contrast with active US visits by Korean moguls during the former President Barack Obama’s 2009 inauguration. At that time, business leaders from the Federation of Korean Industries visited their factories in the US before and after the inauguration in January 2009, to make connections with US political and business circles.

According to news reports, Woo Oh-hyun, chairman of construction firm Samra Midas Group, and Kang Ho-gap, chairman of the Association of High Potential Enterprises of Korea, are to participate in Trump’s inauguration on the recommendation of ROK-US Alliance Friendship Association.

Although many economists forecast that Trump will be moderate in pushing his protectionist stance in trade, his pledge of putting the US first in trade is likely to hit Korea’s growth-pulling industries such as auto, electronics and steel.

However, his other vow to invest $1 trillion in infrastructure could be also an opportunity for businesses in construction, defense, shipbuilding and pharmaceutical industry.

Finance Minister Yoo Il-ho told reporters Friday that he will monitor Trump’s inauguration early Saturday to grasp the new US administration’s policies on economy and trade.

“I will watch whether there is any change between what he has said and what he says now about trade issues,” Yoo said.

Meanwhile, Korean shares traded lower on Friday, as investors were cautious about the impact of Trump’s inauguration. The benchmark Kospi inched down 0.35 percent to close at 2,065.61, Friday. The won gained 0.7 percent to close at 1,169.5 won per dollar.

Kim Yu-kyum, analyst at Cape Investment & Securities, said Trump’s push to reduce US current account deficit against China and Korea is likely to drive up the yuan and the won.

“While his economic policies are uncertain given that he has not completed naming his cabinet yet, his expansionary fiscal policy will be helpful in pulling up the global economy,” Kim said.