His comments came as prices of some agricultural products have shot up more than 100 percent on-year in recent weeks, weighing on consumers who would have to spend more to prepare traditional food during the holiday set for Jan. 27-30. 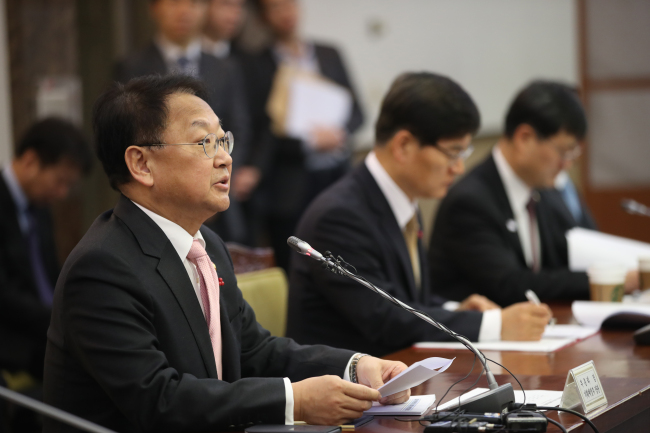 “The government will monitor any excessive stocking of products and price hikes, in joint efforts with related ministries and civic groups.”

Yoo forecast that prices of agricultural products will stabilize after April, as the cultivation of vegetables will expand near spring.

However, prices of petroleum-related goods and processed foods will continue to rise due to a rise in the global prices of commodities, he said.

To stabilize egg prices, which have skyrocketed due to a shortage in eggs in the wake of the bird flu outbreak here late last year, the government will diversify egg import channels, Yoo said.

Korea imported about 100 tons of US eggs with zero tariffs last week to meet the egg shortage and stabilize their soaring prices. Eggs have almost doubled to 9,543 won per 30 eggs as of Jan. 12 from 5,612 won as of Dec. 6, according to the Korea Agro-Fisheries & Food Trade.

Meanwhile, consumer inflation is feared to gain further as the Bank of Korea’s recent data showed that the producer price index, a leading indicator of consumer prices, hit a 17-month high in December.

The producer price index rose 0.8 percent to 100.79 in December from a month earlier, which was the fifth consecutive gain since August. The figure is the highest since 101.4 in July, 2015.

The rise in producer prices was attributed to the price hikes of agricultural goods and manufactured products, the BOK said.

In December, the prices of white radish rose by 177 percent, western cabbage by 104 percent, and frozen squid by 73 percent, compared to the previous year. Diesel prices rose 24 percent over the same period.

According to the central bank’s projection, consumer prices are expected to hit its target of 2 percent in the middle of this year and mark an annual rate of 1.8 percent in 2017.

Rising consumer prices have sparked concerns over the possibility of stagflation in which an economic downturn coincides with high inflation.