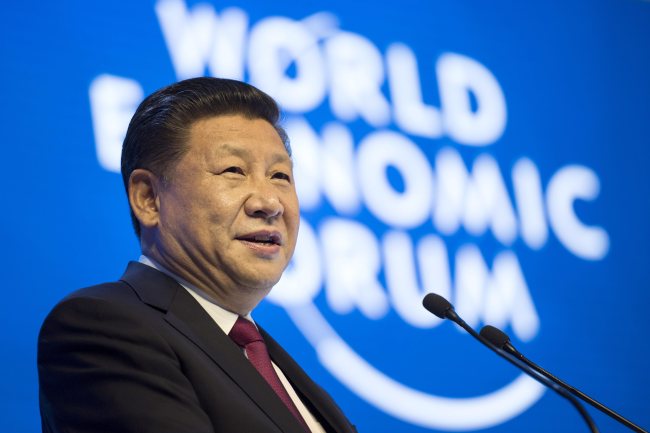 China‘s President Xi Jinping speaks in the Congress Hall on day one of the 47th Annual Meeting of the World Economic Forum in Davos, Switzerland, Tuesday. EPA-Yonhap
DAVOS, Switzerland (AFP) -- With Donald Trump about to get the keys to the White House and the political winds blowing a populist gale through Europe,

Enter stage left Chinese President Xi Jinping, who in an hourlong speech Tuesday won over a crowd of ardent capitalists gathered at the World Economic Forum in Davos, Switzerland.

“I’ve been coming to Davos for years and that‘s the kind of speech that was usually given by a US president,” said John Neill, the head of British logistics company Unipart.

“He’s used this brilliantly to try and take global leadership,” Neill added, believing he may have witnessed a turning point in history.

The irony that it was the leader of communist China who preached a message in favor of open markets and globalization, in contrast to Trump‘s “America first” approach, was not lost on attendants such as former Swedish prime minister and Davos regular Carl Bildt.

“A century ago there was a man called Vladimir Lenin, who was sitting in Zurich nearby plotting world revolution. And now a hundred years later we have the leader of the largest communist party in the world coming to the leading meeting of global capitalists to preach the virtues of globalization,” he told AFP.

“Lenin is dead,” said Bildt, who is now co-chair of the European Council on Foreign Relations.

Like most Xi speeches, this one was rich in historical allusions and Chinese proverbs as he paid his maiden visit to the Davos forum.

But addressing a packed convention hall, Xi also invoked tropes drawn from Western culture including Charles Dickens (“It was the best of times, it was the worst of times”) and the Gettysburg Address.

Countries cannot pursue development in isolation of the world around them, he said.

Trump, who takes office as US president on Friday, routinely browbeat China on the campaign trail and has threatened punitive tariffs on its exports as he vies to restore millions of lost factory jobs.

In Davos, Trump transition adviser Anthony Scaramucci said “we want to have a phenomenal relationship with the Chinese.”

However, other members of the Davos tribe were thrilled at the prospect of globalization staying safe under Chinese custodianship.

“I heard a president that was wise and measured,” said Philippe Brassac, the chief executive of Credit Agricole, one of France’s biggest banks.

“In the end this is a leader who is positioning himself as, at least in part, responsible for the fate of humanity,” he said.

May said Brexit-bound Britain will leave the European Union’s single market in order to restrict immigration in a clean break from the bloc, but that lawmakers can vote on the final deal.

“I‘ve just been listening to President Xi speaking which I found very inspiring because he’s championing openness and cooperation, which is exactly what the world needs,” Lovegrove said.

Still, others in the Davos crowd were unwilling to overlook the kind of political system Xi oversees.

“Close your eyes on Xi‘s speech, you could almost forget he leads an authoritarian regime. Do the same for Trump, same happens for democracy,” said analyst Ian Bremmer.

IHS Markit chief economist Nariman Behravesh said he was encouraged by Xi’s promises to open up the Chinese economy further to more imports and foreign investment.

But he added: “In the end what they actually do matters more than what President Xi says.”