The team, led by Special Counsel Park Young-soo, said it has requested a local court issue the warrant for Lee, the de facto leader of the nation’s largest conglomerate, on suspicion of providing financial assistance worth 43 billion won ($36.4 million) to Choi and her family in exchange for business favors, committing perjury at the parliament and misappropriating corporate funds. 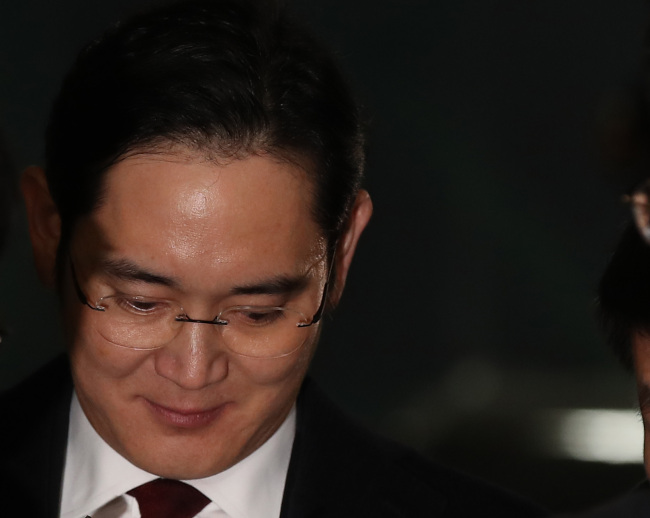 Lee is the first chaebol owner the counsel has sought an arrest warrant for over alleged involvement in the scandal. He is also the first head of Samsung to face a potential arrest warrant in the conglomerate’s 79-year history. The team will continue to investigate other Samsung executives implicated in the scandal, without seeking arrest warrants, said Lee Kyu-cheol, spokesman for the special counsel. They will also summon Park’s former Chief of Staff Kim Ki-choon and Culture Minister Cho Yoon-sun for questioning Tuesday morning, making a step forward before interrogating the incumbent president currently undergoing an impeachment trial.

“We made the decision after serious consideration,” said Lee. “By seeking the warrant, we have reached a conclusion that establishing justice is more important than (considering) the nation’s economic situation,” said Lee, referring to opposition from business circles that has speculated as to the potential consequences of creating a leadership vacuum in Samsung, the world’s largest smartphone and chipmaker which generates sales amounting to 300 trillion won a year.

In a letter to the court, the counsel has implicated Choi as the beneficiary of Samsung’s financial assistance, not President Park.

But the team has reportedly nearly completed proving that Choi and Park are in the same boat in sharing the profits from financial support, constructing a legal base to indict the president.

The decision came four days after the counsel summoned Lee last Thursday. Lee is the vice chairman of Samsung Electronics and the only son of the now bed-ridden Samsung Group Chairman Lee Kun-hee. The 48-year-old was grilled for over 22 hours as a bribery suspect.

The investigators believe Samsung gave money to organizations set up by Choi and her associates in exchange for Park or her former aides pushing the state-run National Pension Service to approve a merger between two Samsung affiliates in 2015, which was widely seen as a way of speeding up Lee’s succession.

Investigators earlier indicted former Welfare Minister and NPS head Moon Hyung-pyo on charges of abusing his power to prevent an independent panel from holding a meeting to discuss NPS’ stance on the controversial merger between Samsung C&T and Cheil Industries. NPS, as then the largest institutional investor, had decided to support the merger after holding an internal meeting among its asset managers, not an independent panel.

The team has been seeking evidences to prove allegations that Lee was directly asked by President Park to support Choi in exchange of favors during one-on-one meetings held before and after the merger. At the National Assembly last month, Lee denied that the merger had anything to do with his succession, and that he was not aware who Choi was not until September 2016 when the news reports started to flare up over her mysterious connection to Park.

The court is likely to decide on the fate of the Samsung heir after holding a hearing Wednesday.

If the court approves investigators to arrest Lee, Samsung Group said it is feared to face a massive leadership vacuum.

The group said in a statement that it respected but regretted the decision by the special counsel to seek for the arrest. While reiterating that the funds provided to the organizations in question were not in return for favor, the group added that it hoped the court to reach a wise and fair decision based on legalities and facts.

Industry watchers said that an arrest would suspend the group’s restructuring efforts aimed at securing transparency, as well as its mergers and acquisitions drive for future growth will be tied down, putting its long-term plan at risk.

“Samsung Electronics’ plan to create a holding company will be put off for indefinite period, if Lee is arrested, as well as other CEOs involved,” said Park Ju-gun, CEO of CEOScore, a local corporate watchdog.

“Samsung may have to consider changing the direction of Lee’s succession scenario which the group has been pushing for last two or three years,” he said. 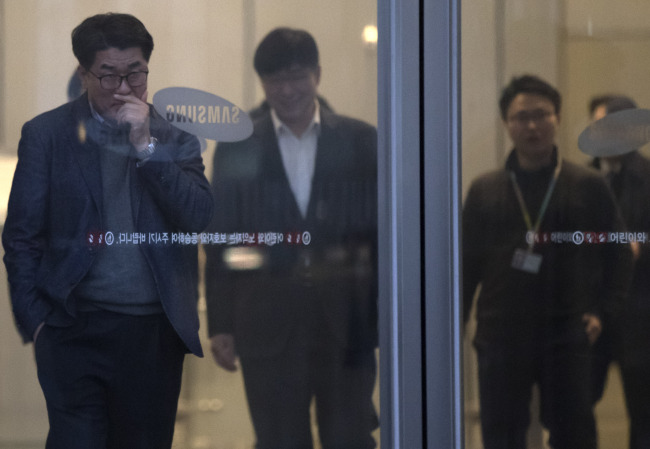 Samsung workers come out of their office on Monday. (Yonhap)
In November, Samsung Electronics said it would review creating a holding company, increase cash returns to shareholders and have at least one outside director as part of efforts to enhance shareholders’ value.

The announcement comes nearly two months after a proposal by US activist hedge fund Elliott Management to reshape its corporate structure.

On Oct. 6, Elliott, through its affiliates -- Blake Capital and Potter Capital -- sent a letter to Samsung Electronics’ board members to split the tech giant into holding and operating companies, and list the operating unit on the Nasdaq stock exchange.

Yoon Tae-ho, an analyst with Korea Investment and Securities, said in a separate report that Samsung Electronics may turn its focus away from the planned restructuring, in the face of Lee, on improving profit rather than seeking a change in corporate structure.

“Samsung Electronics is likely to concentrate on proving the legitimacy of the owner family by improving the trust with the media and the shareholders, and enhancing profits,” he said.