“We are not going to decide today whether to seek the warrant,” said an official from the special investigation team looking into the corruption allegations involving Park and her longtime friend Choi Soon-sil.

The team said the decision will be made before Monday’s regular briefing set for the afternoon, adding it is closely reviewing the case, which they said was “complex.” The team also said it will decide on whether to seek arrest warrants for other Samsung executives questioned last week. 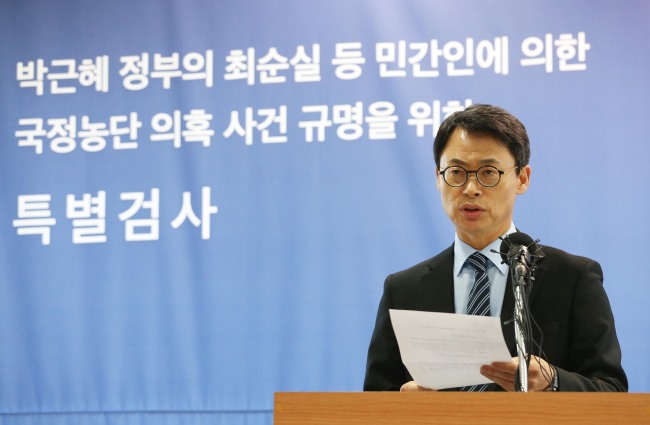 An official from the special investigation team looking into the corruption allegations involving President Park Geun-hye and her confidante Choi Soon-sil. (Yonhap)
Former Presidential Chief of Staff Kim Ki-choon and incumbent Culture Minister Cho Yoon-sun, both implicated in the scandal, will be called in for questioning separately, the team said.

The special counsel team led by Park Young-soo has been facing mixed calls on Lee. Some liberal politicians urged investigators not to give favors to conglomerate owners, while others demanded they not be harsh on business leaders, pointing out Samsung’s influence in South Korean economy.

“We have done the investigation fully. Only the final decision is left to be made, but we are gauging various factors,” another official was quoting by Yonhap News Agency as saying.

On Thursday, the vice chairman and only son of Samsung Group Chairman Lee Kun-hee, was grilled by the special investigators for 22 hours.

Questioned as a bribery suspect, the heir apparent to the nation’s largest conglomerate could face additional charges including perjury, embezzlement and breach of trust, according to reports. On the request of the special investigators, a parliamentary committee Thursday reported Lee for giving false testimonies during a hearing last month. Lee told lawmakers that he had never made donations in pursuit of any favors and had no knowledge of who Choi really was.

However, the counsel believes Samsung gave money to organizations set up by Choi and her associates in exchange for Park or her former aides pushing the state-run National Pension Service to approve a merger between two Samsung affiliates in 2015, which was widely seen as a way of speeding up Lee’s succession. Despite strong opposition by individual investors and market advisors, the deal was approved through the support of the NPS, the largest institutional investor of Samsung C&T at that time.

Investigators have been zeroing in on a 22 billion-won ($18.7 million) contract signed by Samsung Electronics and a Germany-based company owned by Choi and her horse-riding daughter Chung Yoo-ra in 2015. Samsung also donated 20.4 billion won to the Mir and K-Sports foundations launched by Choi and her associates. The counsel has already arrested NPS Chairman Moon Hyung-pyo over his role in the dubious merger.

Slightly changing his earlier position, the Samsung vice chairman reportedly told special investigators last week that his company was forced by Park to make a hefty donation to Choi’s organizations.

If the court approves investigators’ request to arrest Lee, Samsung Group is feared to face a massive leadership vacuum. Not only its restructuring efforts, but also its merger and acquisition drive will all be tied down, putting Samsung’s long-term plans at risk.