Major South Korean banks have been strengthening their mobile capabilities to dominate markets ahead of the planned launch of the country's first Internet-only bank, industry sources said Wednesday.

Shinhan Bank set up its mobile banking platform 'Sunny' bank as part of efforts to lure new customers. It said customers can open bank accounts by verifying their identities through mobile phones and ID cards without visiting bank outlets. 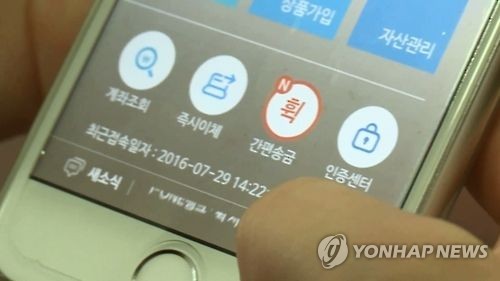 Woori Bank has also introduced its mobile bank called 'Wibee' to offer various banking services to those who use smartphones.

Just a month ago, the financial authorities approved a plan to establish the country's first Internet-only bank that does business without face-to-face contact with customers. K-Bank, led by a consortium of KT Corp., Woori Bank and 19 other firms, plans to start operations in late January or early February. It has the goal of becoming the No. 1 mobile bank with 15 trillion won in capital in a decade through innovation and differentiation, according to its head Shim Sung-hoon.

The move is part of South Korea's efforts to foster the financial technology, or fintech, sector and enhance the global competitiveness of the financial industry.

A consortium led by Kakao Corp., the operator of South Korea's top mobile messenger KakaoTalk, has also applied for government approval for its plan to establish an Internet-only bank. Last week, Kakao Bank submitted the application to the Financial Services Commission to start business. If approved, it would become the nation's second full-time digital bank after K-Bank. (Yonhap)