The number of participants in Saturday night’s rally brought the cumulative number of people who have attended the protests since October to 10 million, according to rally organizers.

The police, which counts the number of participants at a particular point of time, reported the turnout on the Dec. 31 rally at 65,000 participants in Seoul.

Accused of allowing her civilian friend Choi Soon-sil to meddle in state affairs and colluding with her to extort funds from conglomerates, Park was impeached by the National Assembly early last month. She now awaits the impeachment trial at Constitutional Court. 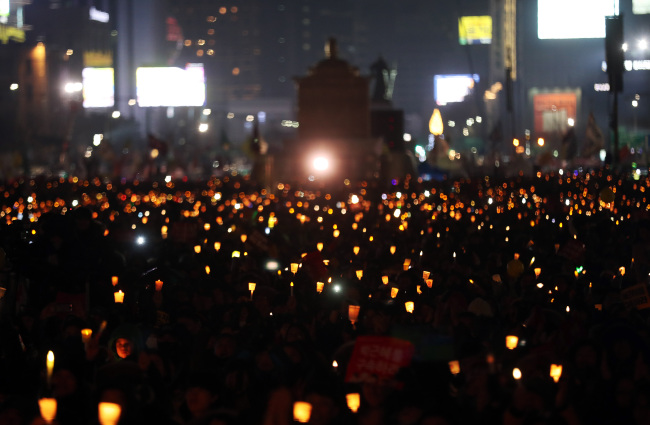 Protestors hold candles at the 10th Saturday night rally against President Park Geun-hye, held on the last day of 2016 at Gwanghwamun Square in central Seoul. (Yonhap)
“Citizens, a lot of them in family units, came out to the rally, bidding farewell to the noisy year and wishing to remove the president out of her office,” a rally organizer said.

While some 5,000 pro-Park organization members also held a counter-protest nearby in Gwanghwamun Square in Seoul, the last rally of the year ended peacefully without any arrests, the police said.

During the protest, rally-goers marched up to a point 100 meters from the presidential office of Cheong Wa Dae, the acting president’s office and the Constitutional Court, while demanding Park be punished and for a swift decision from the court.

A festive mood spread across the grounds as it was the last day of the year. Participants enjoyed cultural performances and events, including firecrackers and laser shows.

After the rally was over, a lot of the citizens remained to watch the symbolical New Year’s Eve bell-ringing ceremony at Bosingak, a large bell pavilion at Jongno in central Seoul to welcome the New Year.

The rally organizers -- a group of over 1,500 civic and labor groups -- said Sunday they will continue to lead the rallies until Park’s impeachment is finalized by the Constitutional Court.

They have registered for Saturday rallies in January, planning to march around the presidential office and the Constitutional Court.