Some of the biggest US blockbusters in recent years were filmed here, including 2015 action comedy “Spy” with Jude Law and 2016 mystery thriller “Inferno” featuring Tom Hanks.

The 60-year-old star of the sequel to Dan Brown’s “Da Vinci Code” spent several weeks in the Hungarian capital during the shooting.

”It is one of the most beautiful cities in the world,” Hanks gushed following his stay.

Budapest was back in the headlines when heartthrob Gosling was in town for five months to film the follow-up to the 1982 sci-fi classic “Blade Runner” earlier this year. 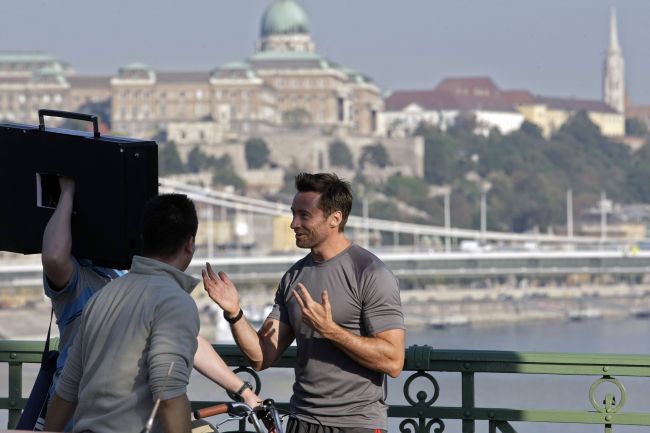 A marketing triumph for the Hungarian government, except for a minor jarring note.

In one of the photos Gosling, unaware of subtle political rivalries, was seen lazing around in a hotel bed with a copy of the Magyar Nemzet newspaper, owned by the nemesis of right-wing Prime Minister Viktor Orban.

The PR glitch was swiftly fixed by the pro-government broadcaster TV2, which showed the image but blurred the paper’s name.

The owner of TV2 is close Orban ally Andy Vajna, who has been state film commissioner since 2011.

Often referred to as “Mister Cinema”, the magnate spent most of his career working in Hollywood and produced numerous smash hits including the “Rambo” and “Terminator” movies.

Vajna is one of the masterminds credited with boosting Budapest’s reputation as a world-class film capital, notably by co-financing the state-of-the-art Korda Studios.

Opened nearly a decade ago, the huge complex is set amid sprawling vineyards some 20 kilometres (around 12 miles) from the capital.

During the Cold War, the site was a military base for the country’s communist forces.

Now the only conflicts played out there are fake ones, produced on one of Europe’s largest sound stages.

For box-office sensation “The Martian” with Matt Damon, the studio brought in no less than 4,000 tonnes of red earth to turn it into Mars.

In fact even Budapest itself featured in the movie, albeit disguised as Beijing. The versatile city has previously also “played” Paris, Vienna and Moscow in other films.

”And we’ve only reached 75 percent of our capacity,” he added with a grin.

Back in 2004, Hungary introduced a tax law enabling filmmakers to recover up to 25 percent of their costs.

The seductive scheme paid off. This year, both foreign and national productions injected over 270 million euros ($280 million) into Hungary, compared with 105 million euros in 2011, according to the government.

”The sector makes up 0.15 percent of Hungary’s gross domestic product, the highest ratio anywhere in Europe,” Agnes Havas, the director of the National Film Fund put in place by Vajna, told AFP.

Around 100 companies now work in the Hungarian movie industry, employing around 4,000 people.

But the dream factory not only generates big US productions, but also homegrown talents like director Laszlo Nemes whose chilling Holocaust drama “Son of Saul” won the 2016 Oscar in the best foreign film category.

”The services provided by the industry are really at the top of their game,” said the independent filmmaker, adding that he was “proud” of his city where he recently finished shooting his latest movie.