The landmark is the result of aggressive expansion by the Korean arm of the Seattle-born coffee chain, which opened 131 new stores between 2015 and 2016. Korea is the fifth country to have 1,000 Starbucks stores after the US, Canada, China and Japan. Sales have grown in step with the number of stores, with the chain forecasted to break the 1 trillion won mark ($838.2 million) this year. 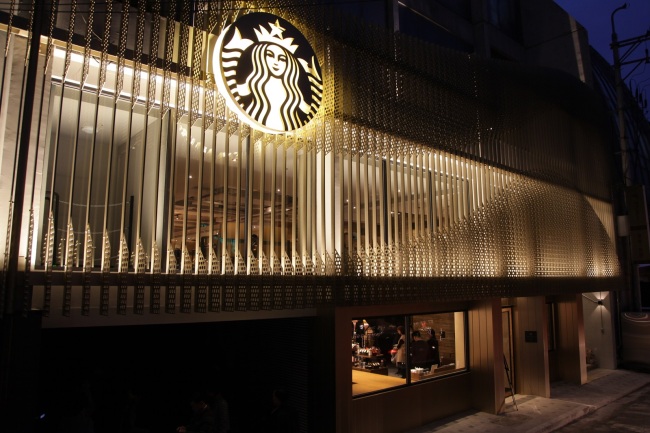 “Starbucks is more than just a place that sells coffee, just as how their mission statement is to ‘inspire the human spirit’,” said Sookmyung Women‘s University professor Suh Yong-gu.

“What they’re selling is a place away from home and work where people can go and to relax. They focus their energy on a premium design concept in their spaces and products, appealing to urbanites. There are so many places you can go to get coffee, but all the stylish people go to Starbucks.”

According to Suh, Starbucks‘ emphasis on a horizontal corporate culture has also solidified its image as a modern, developed company, making it more attractive to young consumers.

All Starbucks stores are directly operated by the company, rather than being licensed out to franchisers like the chain’s other big rivals here. The direct operations help maintain consistent quality in coffee and other services, while freeing up the company to open up new stores more aggressively.

Directly operated stores are not subject to restrictions that prohibit franchise stores of the same brand from opening within 500 meters of one another.

“I go to Starbucks because it’s everywhere, and I know exactly what I’m getting when I walk into one,” said Kang Su-jin, a brand developer living in Seoul. “I have meetings with clients in all parts of the city, but no matter where I go I know that there will be a Starbucks and that I’ll be comfortable there.”

In addition to the homogenous interior design and steady Wi-Fi connections that appeal to Seoul’s tech-savvy consumer base, Starbucks uses automated espresso machines to produce the same espresso taste.

“If I’m going to pay 5,000 won for my daily cup of coffee, I’d choose a place like Starbucks that always guarantees taste and quality,” said 26-year-old office worker Shin Ji-yeon.

South Koreans have shown loyalty to the chain, responding well to the company’s introduction of tech-savvy services such as the mobile-based Siren Order and drive-through stores that are still relatively unchartered territory in the country.

The Siren Order system was developed specifically for Korea and was eventually implemented in the US. As of October, more than 10 million orders had been placed through the app in Korea.

Starbucks has also been using its high brand power to foster loyalty among its clientele, such as through releases of annual planners every winter. With a new design and layout each year, the Starbucks planner has become a must-have limited edition item.

“The 2017 Starbucks Planner is a special experience that allows consumers to meet Starbucks not only in the stores but in everyday life,” said Starbucks in a statement. The planner itself has become so popular that people have begun re-selling them online and are even selling the stamps that must be collected to receive a planner.

According to Starbucks, the company created a new design team in 2013 responsible for creating Starbucks merchandise. Over half of the merchandise sold has been designed specifically for Korea, making the merchandise an important part of Starbucks‘ localization strategy.