[ The Korea Herald – Send E-mail ]
Paris exhibit celebrates UNESCO heritage site of Palmyra
By 줄리 잭슨 (Julie Jackson)
Published : Dec 14, 2016 - 15:10
Updated : Dec 14, 2016 - 15:10
PARIS (AP) -- Days after the Islamic State group seized back control of the ancient Syrian town of Palmyra, a prescient exhibit was inaugurated in Paris on Tuesday that aims to educate the public on the wounded wonder that Syrians affectionately call the ``Bride of the Desert.‘’

Its organizers said the display opening Wednesday is designed to be an ``emotional‘’ experience that takes visitors to Palmyra and other endangered world heritage sites in the Middle East. It‘s also meant to show how much of the Syrian site’s heritage so far has been spared.

The exhibit at the Grand Palais plunges visitors into a 3-D, 360-degree projection using never-before-seen images of Palmyra. They were taken by a drone in April days after the city was liberated from Islamic State group fighters.

But just as the exhibit opens, the threat to the city it honors is ratcheting up. 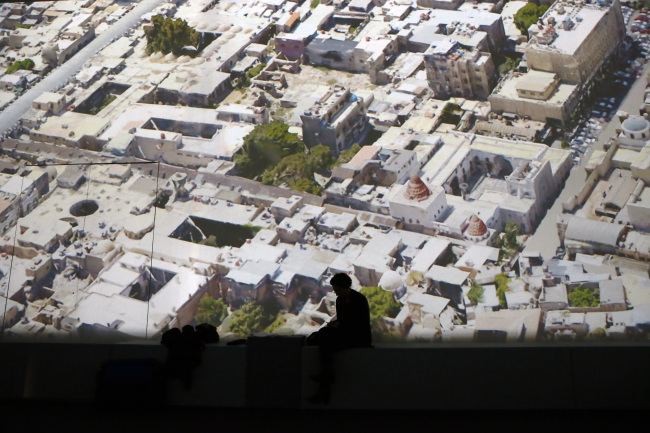 A visitor looks at the Palmyra Exhibit, a 3-D projection featuring never-before-seen images of Palmyra taken by a drone in April after the city was liberated from IS fighters, at Grand Palais in Paris, Tuesday. (AP - Yonhap)
Islamic State group militants on Sunday re-occupied the site, from which they had been expelled earlier this year, in a surprise attack that took advantage of the Russian and Syrian governments’ preoccupation with the front in Aleppo.

French President Francois Hollande, who inaugurated the exhibit alongside UNESCO chief Irina Bokova, spoke about the ``terrible, tragic coincidence’‘ of the exhibit’s timing.

``At the time we inaugurate this exhibition, there are bombings over Aleppo. ... Civil populations are being held hostages and martyrized,‘’ Hollande said. ``And there is the return of (IS) in Palmyra.‘’

Last year, the militants destroyed the Temple of Bel, which dated back to the year 32, and the Temple of Baalshamin, a stone block structure fronted by six towering columns -- viewing them as monuments to idolatry. They also blew up a nonreligious ancient monument, the Arch of Triumph.

Despite the loss of such archaeological treasures, the researcher behind the 3-D imagery, Yves Ubelmann, called the previously unseen photos he collated ``positive‘’ because they illustrate how much of Palmyra remains intact. Experts estimate that some 80 percent of the city‘s ancient ruins are still unharmed, for now.

A UNESCO world heritage site, Palmyra boasts 2,000-year-old Roman-era colonnades and priceless artifacts. Before the war, it was Syria’s top tourist attraction, drawing tens of thousands of visitors each year.

``Instead of responding to extremists with guns, we‘re fighting to show that heritage and culture matter,’‘ Bokova said. ``They want to destroy our very understanding of humanity, and this shared understanding is the very spirit of this exhibit.’‘

Ubelmann founded the France-based organization Iconem whose state-of-the art technology is showcased in the exhibit and maps out with arresting realism every nook and cranny of the sites that are found among the Middle East’s most hostile places.

As well as Palmyra, they include Bamiyan in Afghanistan, Khorsabad in Iraq, the Umayyad Mosque in Syria and Kerak Castle in Jordan.

Ubelmann was the first person Syria‘s heritage authority sent to Palmyra following its liberation from militants in March because of his expertise and familiarity with the site.

It’s unclear whether President Bashar Assad will prioritize retaking the old city and what‘s left of its archaeological treasure.

``At least we have these photos in April that can be an archive for the memory of humanity,’‘ Ubelmann said.

Marielle Pic, the curator of the exhibit and director of the Oriental Antiquities Department in the Louvre Museum, expressed remarkable sangfroid at the prospect of Palmyra’s further destruction at the hands of militants.

Archaeologists, she said, must simply ``accept it.‘’

“We know that each era can be a new chapter for a site. Now, Palmyra has entered a dark period,‘’ Pic said. ``But for us the destruction is part of the story of an archaeological site. We need to accept it.‘’

The exhibition, ``Eternal Sites, From Bamiyan to Palmyra,‘’ runs until Jan. 9.