Megastar group Big Bang is no exception. The group has reaped worldwide success since its debut 10 years ago. Reported to have raked in $44 million this year, the five-member band ranked No. 54 on Forbes’ list of celebrity earnings, becoming the first Korean act to make the list.

“It still doesn’t feel real,” said Big Bang’s rapper T.O.P. on his upcoming military service next February, at an interview at the Seoul headquarters of YG Entertainment, the group’s label, on Tuesday.

“It’s something that I have to do,” he said. “I’m just trying to make the most of every day before I go, and reach out to fans.” 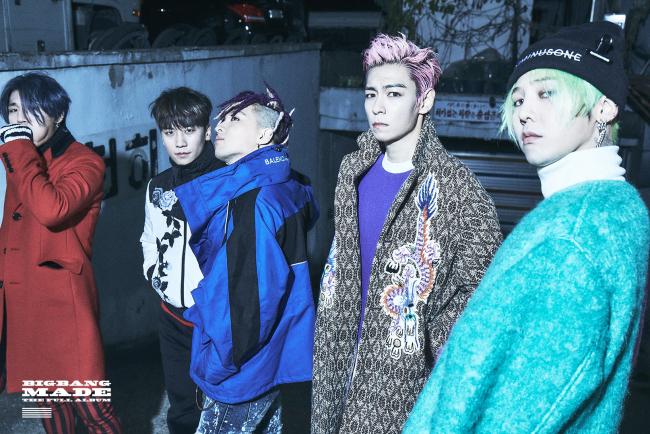 Promotional image for Big Bang’s LP “Made The Full Album,” released Tuesday (YG Entertainment)
Big Bang returned with a third LP, “Made The Full Album” on Tuesday, though the group has been active through various units -- such as the rapper duo GD & T.O.P -- and singles throughout the years.

The new album contains three new tracks -- “Fxxx It,” “Last Dance” and “Girlfriend” -- and eight tracks that were released as singles last year, including “Bae Bae” and “Bang Bang Bang.”

The group will continue with on-air and on-stage promotional activities for the album until T.O.P’s February departure. After that, the remaining group members, who have all yet to complete their military services, will enlist “one after the other,” said G-Dragon. “It’s only a matter of when.”

“It’s the duty of every Korean man,” said Seungri. “And that includes Big Bang. We all agree on that.”

The members spend a lot of time discussing the group’s future these days, often wondering if they’ll be able to regroup years later. “We tell each other, let’s walk away from this anytime we lose confidence (in our art,)” said T.O.P. “But I think we’re able to say that because we have that much trust in each other.”

Since its 2006 debut with “This Love,” the group has infused mainstream K-pop with an eclectic, hip-hop-based sound. It has also set itself apart from other K-pop groups with its self-production skills -- G-Dragon composes a large portion of the group’s songs. The 28-year-old rapper, recently invited by French luxury brand Chanel to its show at The Ritz Paris as a brand ambassador, is also hailed as a fashion icon by global designers.

“This is very likely the last album that all five of us will make together for a long time,” said G-Dragon. “We tried to have fun with it,” he said. The music video for “Fxxx It,” for example, features the members stripped of their usual pop star glam, loitering in alleyways in retro outfits.

“We see Harlem streets in American music videos and we think it’s really cool,” he said. “So although these settings might feel commonplace to Korean viewers, it might feel fresh and new to foreign viewers.”

The music videos for “Fxxx It” and “Last Dance” were also launched Tuesday, reaching some 4 million and 2 million views, respectively, in just 10 hours on YouTube.

YG Entertainment’s in-house producer Teddy, Big Bang’s G-Dragon, and R.Tee co-composed the title track “Fxxx It.” Its lyrics, more playful than the group‘s other songs, are co-written by Teddy, G-Dragon, and T.O.P.

The group will be holding a farewell concert titled “Bigbang 10 The Concert: 0 To 10 Final in Seoul” on Jan. 7-8 at the Gocheok Skydome.