Shinsegae’s duty-free operator announced Monday that it would invest 350 billion won ($300 million) over the next five years to develop and promote tourism in southern Seoul as part of its bid for a new duty-free license.

Shinsegae DF is set to deliver a presentation Saturday to win a license to operate a new 13,350-square-meter outlet in Central City, a shopping and entertainment complex connected to the Express Bus Terminal in Seocho-gu, Seoul. 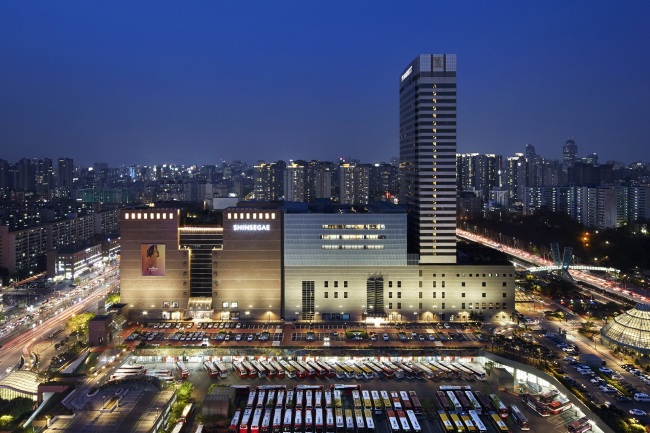 An exterior view of Central City in Seocho-gu, Seoul (Shinsegae DF)
Central City, which currently includes Shinsegae Department Store, has a hotel, movie theater, and restaurants. It is also connected to an extensive city bus and express bus system, along with three subway lines.

The pledged funds will be used to improve tourism infrastructure in the area surrounding Central City, according to the company. This will include developments such as creating an “Arts Street” connecting tourist attractions such as the Seoul Arts Center and Sebitseom -- the glowing artificial island on the Han River -- as well as promotional efforts for Hallyu and tourism.

Shinsegae DF hopes such projects will increase the competitiveness of the overall shopping area to tourists, particularly those from China. According to a 2015 survey by the Korea Tourism Organization, the number of foreign tourists visiting the area around Central City has increased by 19 percent annually since 2012.

The company forecasted that if its new duty-free outlet -- combined with the infrastructure and cultural investments -- attracts some 8.3 million tourists to the area annually by 2018, a tourism boost of 7.5 trillion won would be created over the next five years.

Shinsegae DF operates three outlets in Incheon Airport, Busan and Myeong-dong. The Myeong-dong branch was newly licensed last year. With the boost from its Myeong-dong store, Shinsegae DF expects to break the 1 trillion won mark in sales at its outlets this year, up from 350 billion won in 2015.