The prime minister officially took up the nation’s top job after the National Assembly approved a motion to impeach the disgraced president, going on to preside over a meeting of the Cabinet and the National Security Council. Shortly after the bill’s passage, he made phone calls to the defense, foreign and interior ministers.

At a news conference, Hwang offered an apology to the people, saying he felt a “deep sense of responsibility” for the crisis as Park’s aide. 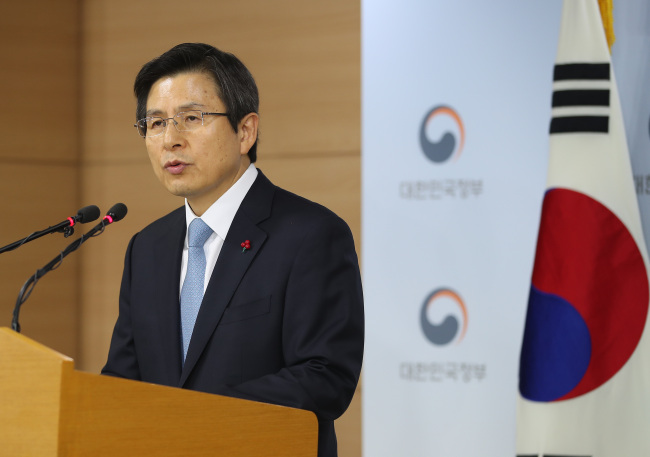 Expressing concerns over political and economic challenges at home and abroad, he pledged to focus on “stable management” of state affairs in an “upright and transparent” manner, in line with public demands.

“There are growing concerns state government is losing steam due to the recent crisis,” Hwang said. “In this grave national situation, there must not be any drifting or power vacuum in state affairs for a single moment.”

To Defense Minister Han Min-koo, Hwang stressed the need for the military to be put on alert against a possible accident at home or provocations from North Korea. But the level of the defense readiness condition is to remain unchanged, according to the ministry.

“Considering our circumstances to be a period of security vulnerability, North Korea could possibly attempt to aggravate confusion in our society through not only nuclear and missile tests but various small-scale, cyber or other forms of provocations,” Hwang said.

In turn, Han relayed the message to all units of the military and convened a video conference with the Joint Chiefs of Staff chairman, chiefs of the Army, Navy and Air Force and other major commanders stationed around the country.

Speculation has been growing the communist state may stage a major provocation in protest against a latest UN Security Council resolution and unilateral sanctions by Seoul, Washington and Tokyo. The North’s major holidays are also in the offing, such as the Dec. 17 anniversary of the death of longtime strongman Kim Jong-un and the incumbent ruler Kim Jong-un’s birthday on Jan. 8.

Wary of concerns over a diplomatic vacuum, Hwang instructed Foreign Minister Yun Byung-se to inform the international community that the situation would not lead to any change in foreign policy or economic relations.

He also called for the ministry to keep up close cooperation for a thorough implementation of the sanctions and for all overseas diplomatic missions to make the utmost effort to maintain Korea’s image.

Later in the day, Yun and other senior diplomats held a series of meetings later in the day with ambassadors of the US, China, Japan, Russia, the European Union and other key partners to explain about the domestic situation and reaffirm the ties.

During a separate call, Hwang urged Interior Minister Hong Yoon-sik to devise “special measures” to forestall any crimes and accidents especially given the ongoing weekly mass demonstrations in downtown Seoul and across the nation.