The giant digital service provider is the dominant search engine, with countless services providing a collecting and curating experience for everything on the web, including news, music, shopping, real estate, navigation and video.

The more the company diversifies its reach, the greater the challenge of keeping its brand identity together becomes.

That task falls to the smiley, rangy 37-year-old Head of Service Design Kim Eon, who took up the post at the end of 2014. Kim is responsible for deciding everything that contributes to Naver’s brand, from visual elements to the names of newly launched services.

A designer by training, Kim started at Naver in 2003 working on designs for the company’s blog service and online communities. Since then, he says, the task of designing and branding digital services has evolved immensely. 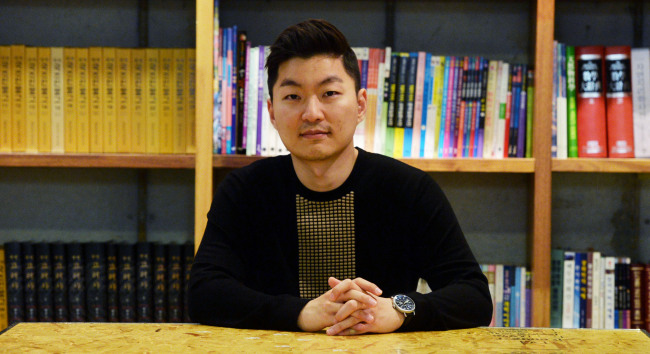 Kim Eon, head of service design at Naver (Yoon Byung-chan/The Korea Herald)
“When a service first starts out and is simple, you could create an identity with just a few basic elements -- logo, color, some design factors,” he told The Korea Herald at Naver’s Green Factory Headquarters in Seongnam, Gyeonggi Province.

“With a service like Naver, which is over a decade old and is a mature brand, you do maintain symbolic elements like our green color or our logo, but the real brand is the actual experience of our services.”

Kim admitted that it sounded like a cliche. But he said that defining a brand as an experience was more difficult, yet necessary in the digital service world, where a user’s entire perspective on a given provider was based on interaction.

“We want the same Naver brand to come through in user interactions on all of our services, which means that we need to have consistency from the tone of alert messages, to where we put each button and how big those buttons are.”

The user as king

Every letter and image on Naver’s services is placed with an intention, but that intention is decided more by Naver’s users than by the design team, says Kim.

“Last year, we were putting together a design guide, and we wanted to show off. I’m a designer by training, so I wanted to create something beautiful. Our approach was based on innovation,” he said.

“But once we showed that to our users, a lot of them were puzzled. Not all Naver users are trendy. We have users who are not part of the digital generation, but use Naver. It’s a service used by nearly the whole country. We don’t want to get greedy and make sudden changes that will be unfamiliar to our users.”

“It sounds like a given, but the rule is to follow the user. Trying to change the user is hubristic.”

Naver’s role, according to Kim, is to find the balance between innovation and familiarity, to nudge the user forward without throwing them off.

“There’s always a hurdle of familiarity that we have to overcome whenever we want to introduce a change,” he said. “So we always have to ask ourselves if the change we want to bring in is innovative enough to outweigh the unfamiliarity our users will experience.”

The efforts to satisfy users can be particularly difficult when users want to go two different ways. “We usually follow the majority opinion, but sometimes the minority opinion is too large for us to ignore,” he said. “For example, we have a Simple Edition of our main site that has just a simple search box. It was designed for the large minority of people who wanted a Google-style page.”

And that is happening more often, according to Kim.

“Users’ preferences are becoming so diversified and personalized that it’s becoming impossible to group them into categories,” he said.

Moving forward, Naver is hoping to further develop its customizing capabilities to allow users to optimally customize Naver’s services to their own taste.

“We’re giving consumers more choice as to what they can put on their Naver site, by expanding categories of content that they can pick and choose,” he said.

“But it can be cumbersome for users to have to go through all those settings. So we’re looking into how Naver can automatically pick up on their preferences and supply them with a customized page. In addition to individual browsing histories, we want to use demographics like age and region to make the services move accordingly. For example, if someone older logs on, the text could automatically become bigger.”

For Kim, who has witnessed the shift from offline to online experiences and from PC to mobile experiences, the next step is to move beyond the boundaries of a device altogether.

“This is why the Internet of Things has become so important in recent years. When the smartphone first came out, it was an intriguing device. People would install various apps and explore what their phone could do. The focus was on functionality. But now that smartphones have become an extension of ourselves, that’s no longer important,” he said.

“What’s more important is how digital services fit your own lifestyle, and give you what you need.”

According to Kim, the next frontier is developing services that can move between devices.

“We have an organization called Naver Labs that is testing out different things. The future of user experience service is bringing mobile experiences to the real world outside of the screen. Whether it’s voice, photos, or videos, services need to be able to move to other devices so that you can keep the services with you without having to carry particular devices around.”

In that sense, wearable devices are only the beginning.

“The smartwatch is not designed to replace the phone, but to become another device where you can use the same services. It’s all about your lifestyle. If you’re usually at home, your main device could be your refrigerator, or your TV. It’s about being able to carry services through different devices. I think it would be fun to work on Naver services that go beyond the smartphone.”

Kim emphasized that Naver must continue to stay tuned to what users want, particularly because the brand was so dependent on user interaction.
“Brands have personalities. People see them as having personalities. They can be friendly, or smart, or greedy. They’re very organic,” he said.

“But unlike offline products, where there is a set period of time during which consumers will use the product before changing it, in the digital world it’s instantaneous. Users can decide they like or dislike a product in an instant, because of one bad customer service interaction or one particularly excellent search.”

He said that because there were so many points of interaction for a brand like Naver, every employee at Naver contributes to the brand.

“Naver’s brand is not one that can be controlled by brand specialists,” he said. “The role of the brand specialist here is to determine an internal goal for the personality of the services, and to help the rest of the employees to all work toward that goal.”