Korea‘s customs service finalized plans Thursday to grant the next round of duty-free licenses next week, despite growing pressure to change the schedule amid a political scandal that has also spilled over to the duty-free project.

The Korean Customs Service alerted bidders for new licenses that the evaluation of their presentations would take place over three days, from Thursday to Saturday next week. 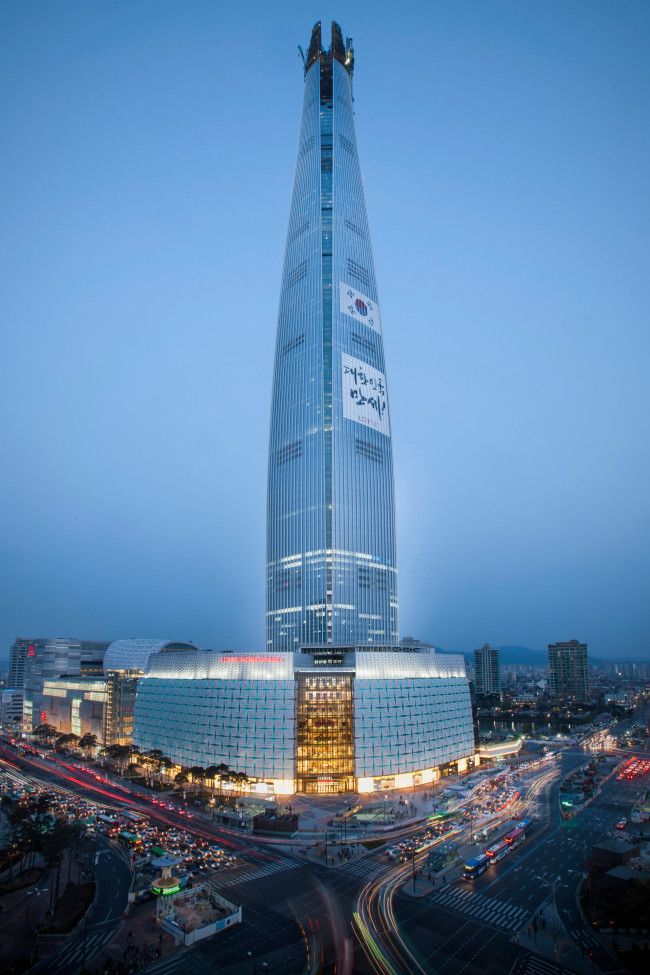 Lotte World Tower in souther Seoul, where Lotte would re-open a duty-free store if granted a license on Dec. 17 (Lotte Duty Free)
Six licenses will be granted, with three going to large conglomerates for Seoul outlets and the remaining to small and medium-sized companies.

The first two days will be devoted to presentations from small and medium-sized enterprises.

The conglomerates vying for a new duty-free outlet in Seoul include HDC Shilla Duty Free, Shinsegae DF, Hotel Lotte, Hyundai Department Store and SK Networks. They will be giving their presentations on the last day. The winning bids will be announced the same day.

Details came despite growing calls for authorities to postpone or cancel the licensing in consideration of the burgeoning scandal that has led to the presidential impeachment vote Friday.

Lotte and SK, considered likely winners of this month’s bid, are among conglomerates that made hefty contributions to two foundations run by President Park Geun-hye’s infamous confidante Choi Soon-sil, allegedly in return for favors.

Prosecutors are currently looking into whether there was foul play on the part of the two companies and the government in relation to their efforts to win back the duty-free licenses they lost last year.

On Thursday, the Citizens’ Coalition for Economic Justice submitted a letter of protest to the KCS and the Ministry of Strategy and Finance opposing the new licenses. The letter claimed that “accusations of bribery involving the new duty-free licenses have not been disproven,” and conglomerates who “contributed to inappropriate foundations have no right to earn new licenses.”

However, the KCS maintains that the evaluation will proceed as planned.

“If it is later found that a corporation has earned a duty-free license through fraudulent or unfair means, the license will be revoked according to current law,” a spokesman said.

To further alleviate concerns about fairness, KCS said it will be disclosing the scores of the companies’ evaluations in announcing the winners. Details of the evaluations in last year’s bidding were not disclosed.

The committee evaluating the companies’ presentations will be made of 10-15 members randomly selected from a 1,000-member pool of specialists that includes professors, bureaucrats, researchers and activists three days before the evaluations begin.

The controversy over the fairness of duty-free licenses has also raised questions about the efficacy of the entire licensing process. Some have suggested the government should introduce a registration system instead, allowing any company meeting certain requirements to operate duty-free outlets.

The KCS officially rejected that idea, claiming a registration system would further tip the scales in competitiveness to “larger companies with capital, buying and marketing capabilities.”