The opposition coalition is vowing to spare nothing to ensure the impeachment bill’s safe passage, but what if it fails?

Words from opposition politicians offer few concrete details as to an alternative plan, except that an outpouring of public anger seems highly likely. 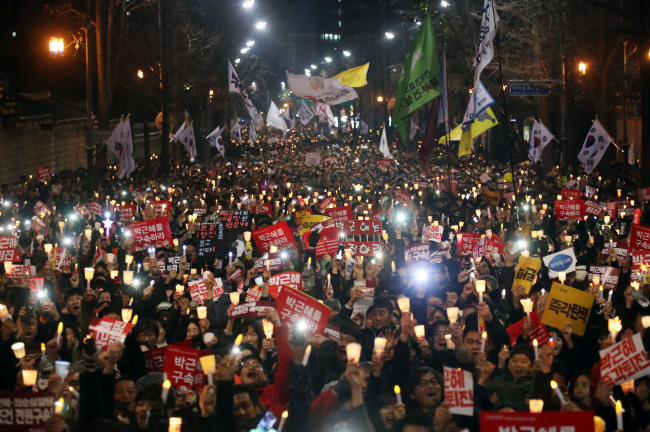 (Yonhap)
“We have crossed the Rubicon,” Rep. Park Jie-won, the floor leader of the People’s Party said.

“If it fails, the candles will burn down the National Assembly,” he warned, referring to the massive candlelight vigils held every Saturday throughout the past month to call for Park’s immediate removal.

If impeachment fails, it would not be just President Park’s allies in the ruling Saenuri Party who would face consequences. The opposition lawmakers, too, would be the target of public anger, Rep. Park said.

Rep. Choo Mi-ae of the main opposition Democratic Party of Korea admitted to having no plan sorted out for such a scenario.

“Right now, we are focusing only on the impeachment vote. As for our steps after the vote, I honestly have no plan right now,” she told reporters.

On the idea floated by Moon Jae-in, the party’s former leader, that all opposition lawmakers should resign en masse if impeachment fails, Rep. Choo just said, “We will seriously consider that option.”

As of Monday, it was only a fifty-fifty chance, the opposition bloc’s floor leader Rep. Woo Sang-ho said.

“Some Saenuri lawmakers decided to vote for impeachment, but we never know the result until it comes out on Friday,” he said.

The opposition coalition -- the Democratic Party, People’s Party and Justice Party -- need at least 28 votes from the ruling Saenuri Party to pass the impeachment bill.

On Sunday, a group of more than 40 Saenuri lawmakers said they would vote for it, unless the rival parties agree on an alternative. This group, however, has a record of flip-flopping from their earlier stance about the conservative president’s fate.

Theoretically, even if Friday’s impeachment motion is turned down, the bill could be reintroduced in a special session of the National Assembly, Seoul National University law professor Cho Guk said.

Under National Assembly clause 92, a bill that is thrown out once cannot be proposed again in the same assembly.

But a special session is a new term, so the law doesn’t apply, the professor explained.

The extra session can be formed when more than a quarter of the 300-member National Assembly agree on its schedule.

An authority from the parliamentary secretariat also confirmed the interpretation of the law.

Still, it remains to be seen whether the opposition parties would want to try the impeachment vote again.

Even if Park is not impeached, the opposition parties won‘t negotiate with the ruling party on the Saenuri-proposed plan for Park’s resignation in April next year.

“We have not and will never agree to wait for the president to resign in April,” Rep. Choo said.

On Saturday, a record of 2.32 million citizens took to streets all around the country, demanding the president step down immediately. Some 3,000 protesters also showed up in front of the governing party’s headquarters in Seoul and called for the party to disassemble.