“I heard (from a person close to Ban) that even if Ban runs in the next presidential election, he will not work with pro-Park lawmakers or join the Saenuri Party,” former Rep. Jeong Dae-chul of the People’s Party was quoted as saying.

The 71-year-old veteran diplomat, who has been with the UN for the past 10 years, was once considered the conservatives’ best shot at winning the next presidential election. Ban, though considered to be leaning center-right, has never publicly made clear his political inclination. 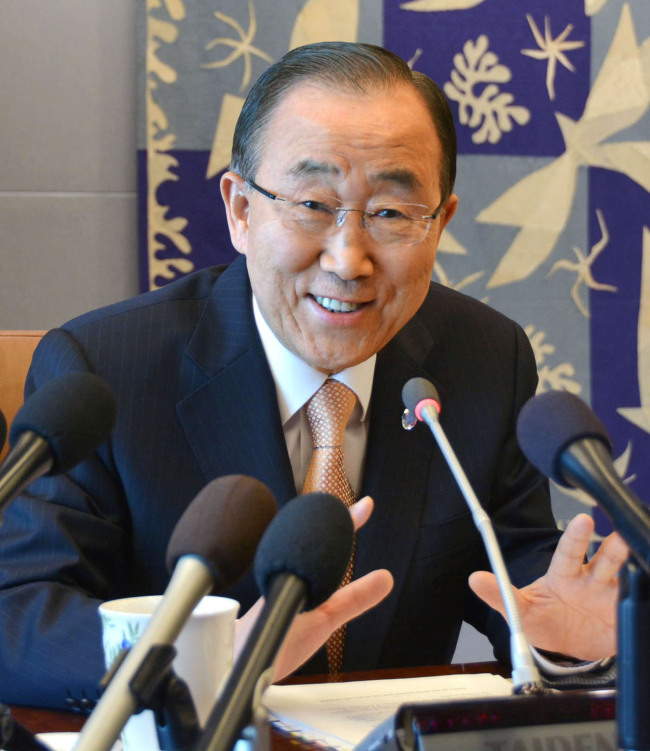 UN Secretary-General Ban Ki-moon attends a press interview in New York, Monday. (Yonhap)
The UN chief has not yet declared his run for the presidency, although he has made several remarks that were taken as hints for such an ambition.

South Korean conservatives are in disarray, with President Park, who won the election on the ticket of the Saenuri Party, deeply unpopular in the wake of a humiliating political scandal.

Speculation is rife that Ban may team up with Park’s now-estranged allies and some center-left politicians to forge a new political force that stands in the center of the country’s polarized political spectrum.

Rep. Kim Moo-sung, a key figure representing the anti-president conservatives, also said recently that there is no reason for Ban to join the foundering pro-Park faction of Saenuri Party.

Ban had a flurry of meetings with politicians this year, which some suspect may have been related to his presidential ambitions.

In May, during his visit to Korea, the UN official encountered several political bigwigs of the Saenuri Party, including floor leader Rep. Chung Jin-suk and Prime Minister Hwang Kyo-ahn.

In September in the US, he met with the floor leaders of the ruling Saenuri Party and two major opposition parties.

Ban is reported to return to Korea in mid-January after his term as UN secretary-general ends on Dec. 31.

According to a Realmeter survey released Thursday, Ban continued to rank as the second-strongest presidential hopeful, and is closely followed by a rising presidential hopeful from the Democratic Party of Korea, Seongnam Mayor Lee Jae-myeong, by 3 percentage points.

Since the scandal ensnaring the president broke in late October, Ban has been outpaced by the former leader of the Democratic Party, Rep. Moon Jae-in, who is first in the poll.