Earing is a social media platform that enables users to convey and share the latest news and information via audio. The product is currently being beta tested, with final improvements being made.

What differentiates Earing from its competitors is its voice-based communication. 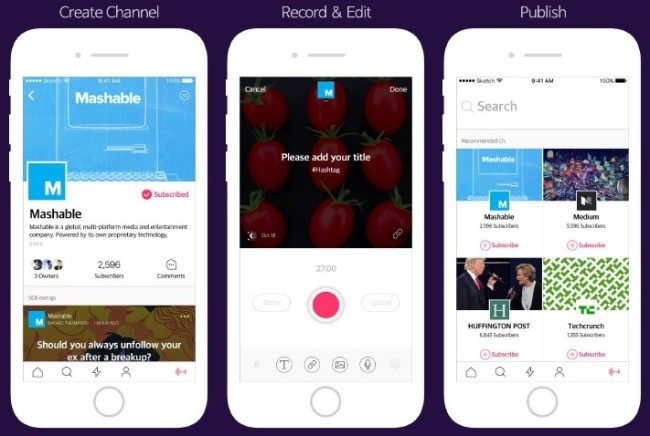 Screenshots of the Earing app in use. (Earing)
The firm’s CEO Hyuck Jae Lee said, “Facebook and Twitter use text, YouTube uses videos, and Instagram uses photos to create and share content. In contrast, Earing uses the voice message as its medium, which is why it is referred to as a ‘social briefing’ app.”

Through the Earing app, users can listen to the latest news and content -- based on their preferences -- organized by date. As soon as earphones are plugged into a device, the briefing begins automatically, without the app having to be opened.

Users can push the “Mike” button to produce their own content and express their opinions. They can even listen to audio replies that other users have attached to their posts. URL links and photos can be uploaded as well. The maximum length of a voice recording is 27 seconds.

CEO Lee said, “After countless tests, we discovered that 27 seconds is the ideal amount of time for users to summarize and relay content as well as for listeners to concentrate on the audio recordings. We also found that -- because every user has a unique voice -- listeners are less likely to become bored when consuming content.”

The product’s greatest advantage is that because it allows news and information to be shared via audio clips instead of text, people can use it while they are driving or exercising.

The app has already received significant attention not only in South Korea (where the beta test is being carried out) but in the US as well. CEO Lee said that Earing is “the world’s first attempt at voice-based social media,” and that his dream is to have the startup grow “to become a global enterprise through a ‘rediscovery of the voice.’” Earing is currently receiving support from the Gyeonggi Center for Creative Economy & Innovation for its debut in foreign markets.