Defense Minister Han Min-koo made the comments during his first visit to a South Korean brigade in Dongducheon and the U.S. 2nd Infantry Division in Uijeongbu, both near the border with North Korea. The two units form the Republic of Korea-U.S. Combined Division. 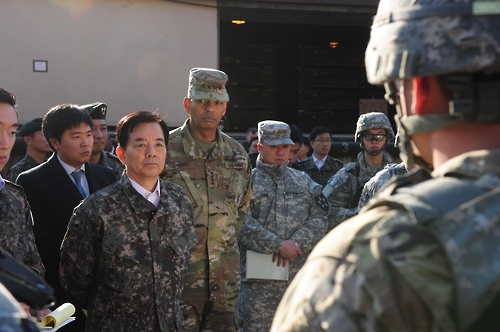 In this photo taken on Nov. 29, 2016, and provided by the defense ministry, Defense Minister Han Min-koo (2nd from L) and U.S. Forces Korea Commander Gen. Vincent K. Brooks (C) on their inspection tour of a unit belonging to the ROK-US Combined Division in Uijeongbu, near the border with North Korea. (Yonhap)

Last year, Seoul and Washington launched a combined division -- composed of the South Korean brigade and the U.S. 2nd Infantry Division -- to bolster joint combat readiness against provocations by the North. The two units carry out normal duties in their assigned areas during peacetime but merge into a single unit led by a U.S. general in times of crisis.

Also Tuesday, Air Force Chief of Staff Jeong Kyeong-doo held a meeting with some 90 airmen to review drills conducted with multinational forces this year and efforts to enhance the country's air defense capabilities. Jeong urged the airmen to focus on countering any possible missile attacks by the North.

Pyongyang conducted two nuclear tests this year alone and launched some 20 missiles, though there is no imminent sign that the North can fire a missile at South Korea. All of South Korea is within easy striking distance of North Korean missiles.

Army Chief of Staff Jang Jun-kyu also made a similar inspection of Army units along the southern coast.

Seoul's Joint Chiefs of Staff said it had detected no particular military movement in the North.

The Marine Corps said it fired 1,800 shots from K-9 self-propelled howitzers, 130mm multiple launch rocket systems (MLRS) and attack helicopters in the latest show of force against the North.

"If the North attacks us with rockets, we will respond with our own MLRS. And we will defeat the North's artillery attacks with the K-9 self-propelled howitzers," a Marine Corps official said.

It is set to conduct several more drills till the end of December. (Yonhap)