[ The Korea Herald – Send E-mail ]
'Missing,' a dark film by women about women
How two actresses fought on set to convince the crew that ‘it’s not all about motherhood’
By Rumy Doo
Published : Nov 29, 2016 - 16:50
Updated : Nov 29, 2016 - 17:06
“Missing” is a rare film in several ways: Made by women about women, it ultimately unites the two main characters in a deep, scarred female kinship, blurring the line between protagonist and villain.

Directed by Lee Eon-hee and starring two women -- Gong Hyo-jin and Uhm Ji-won -- as leads, the film tells the story of a struggling divorcee who discovers her infant daughter and Chinese nanny have gone missing.

But it is not a traditional story about a mother who pines for her lost child, according to Uhm.

“It doesn’t follow a path to some kind of exciting maternal climax,” the actress told reporters Thursday in a group interview. “It’s a film that starts with motherhood and ends with womanhood.” 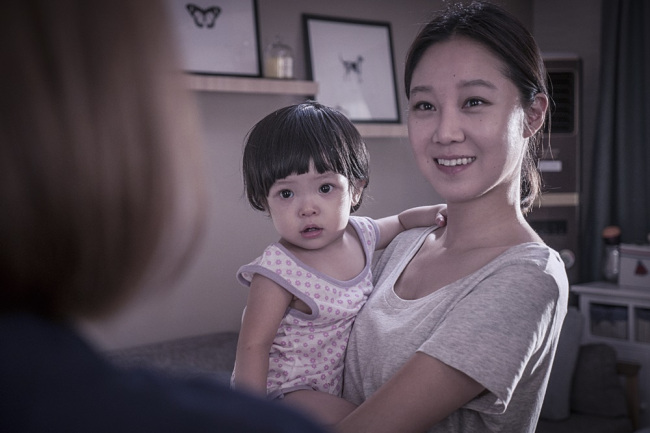 Actress Gong Hyo-jin stars as Chinese nanny Han-mae in “Missing.” (Megabox Plus M)
On a set helmed by a female director, Gong said she felt her “feminism launch into full action.”

“Most of the male staff felt the film was about motherhood. They had concluded that (the main character) was a mother before being a woman. But most of the female staff felt differently,” she said. “We felt it was a film about women.”

Tension had brimmed on set, Gong described. “We had to fight, in a fun way, for (our convictions), to persuade others to see our viewpoint.”

“There are so many ‘bromance’ stories out there,” actress Uhm said in a separate interview, describing “Missing” as a “womance.”

“Why don’t people realize that chemistry can exist between women as well?”

Director Lee Eon-hee was interested in portraying the reality of Korean women, how circumstances change in different stages of their lives and “the inner conflict (women) undergo between each transitional period,” she told reporters after the film’s press screening last Friday.

In the film, Uhm plays divorcee single mother Ji-seon, who struggles to make a living while caring for her daughter Da-eun. One thing she is grateful for in her life is the Chinese nanny Han-mae, played by Gong, whom Ji-seon relies on to watch over her child when she is at work.

One day, Ji-seon returns home to discover that both the nanny and her 13-month-old girl have gone missing. After an investigation that involves questioning strange men in her neighborhood and uncovering lie after lie, she comes face-to-face with her kidnapper nanny. What unravels, however, is not the typical conclusion of revenge or tragedy.

“It’s about two women who are both going through life alone in a difficult world,” who share experiences through a common factor -- the child -- said Gong. 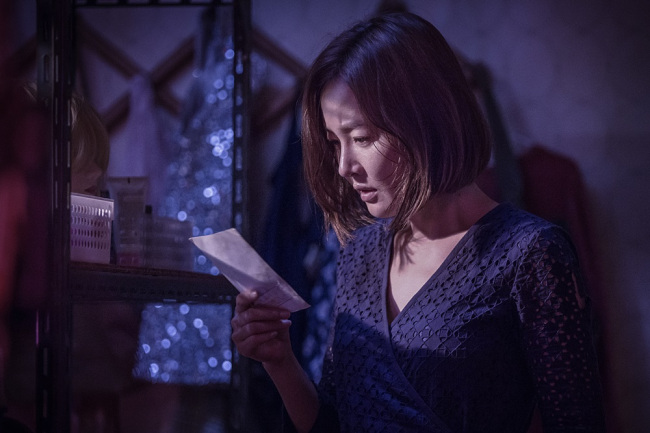 Actress Uhm Ji-won stars as single mother Ji-seon, whose daughter is kidnapped in “Missing.” (Megabox Plus M)
“Which country they were born in and how they’re living is a result of their environment. But they’re woven from the same fabric,” Uhm said.

Most scripts written by men tend to create “inactive” female characters whose actions “can’t be explained rationally,” she said. “This film feels different.”

Uhm was awarded the prize for best actress by the Association of Film Critics for her role as the mother of a child who suffered rape in the 2013 film “Hope.”

Gong most recently starred in TV series “Jealousy Incarnate” as a weather broadcaster who suffers unfair treatment at work for being a woman with a third-rate college degree. She has worked with numerous female directors throughout her career.

“Missing” is the most recent in a handful of Korean films spotlighting women this year -- including lesbian thriller “The Handmaiden”; “The Last Princess,” which depicts a Joseon princess caught in the tides of ruthless Japanese occupation; and “Our Love Story,” a romance between a quiet graduate student and an outgoing waitress.