The old image of the luxury sedan for upper class, middle-aged drivers is gone with the release of the all-new Grandeur last week. The new Grandeur, the sixth generation of Hyundai’s signature luxury sedan, is young, innovative and sporty.

And the market is responding fast.

Of all preorders, 48 percent of the drivers were in their 30s and 40s, a 7 percent increase from its previous model Grandeur HG, said Ryu Chang-seung, head of Hyundai’s domestic marketing head. More than 60 percent of all newcomers were in their 30s, he added at a press conference held prior to a media test drive on Friday. 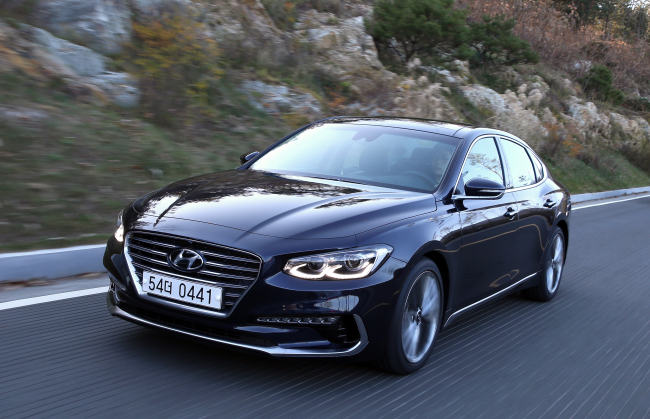 Grandeur’s transformation begins with its body. Sleek and futuristic, the sedan embodies Hyundai Motor’s vision to go young, but to keep its legacy as a luxury brand.

C-pillars gives a full “floating roof” effect, creating an elegant curve all the way to the end and evoking an image of a coupe.

The highlight of Grandeur’s exterior is its tail light in a geometric shape, though it looked similar to Porche’s back design. However, the red fluidic light draws a stark contrast with the blue and white LED head lamp on the front, amplifying its futuristic concept. Say goodbye to Grandeur‘s signature colors of the past -- silver and black. The latest vehicle offers a variety of choice from Pantera Grey, Grand Blue to Khaki Metal. But its emblem “H” attached to the grille on the front and also at the back seemed to be too much, raising questions as to whether the size was the problem or the design itself.

Meanwhile, the inside design features are both modern and classy.

Aligning an 8 inch navigation screen with a small analog clock was an excellent touch together with its prime Nappa leather seats covered with classy stitches and aluminum garnish. To make things more simple and modern, Hyundai reduced the number of manual buttons and put the CD player inside the armrest, not to mention the 12 JBL speakers surrounding the inner space. 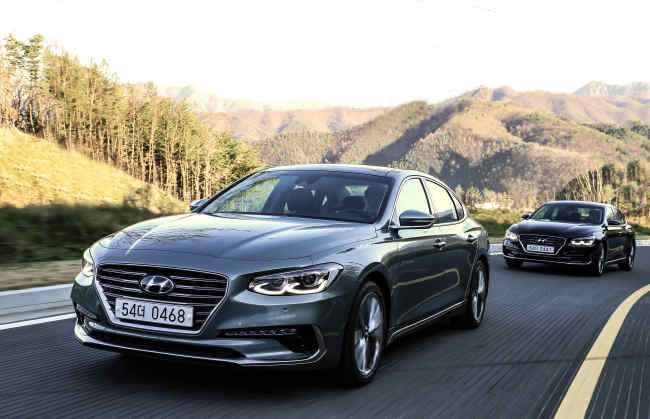 Not just silver and black, a variety of colors is offered for all-new Grandeur. (Hyundai Motor)

Hyundai, however, seemed to have made a big change in terms of interior space. With a sharp and sophisticated look on the outside, the inside felt a lot smaller compared to its predecessors, the sajangnim car, meaning a businessmen’s car with a larger back space designed to add comfort.

The size of the trunk, on the other hand, was extremely large, enough for four golf bags to fit in -- a typical standard to satisfy golf-loving Koreans.

Driving the sedan for some 70 kilometers from northwestern Seoul to Hongcheon, Gangwon Province, was exceptional.

The sedan used for the test drive was 3.0-liter gasoline direct-injection model that delivers up to 266 horsepower and 31.4 kilogram-meter torque.

Stability was the key word, as it offered smooth acceleration and less wobbling on the highway.

Grandeur was not just a vehicle but something that has become interactive to the driver.

Safety was what Hyundai has been focusing on, officials said, stressing the smart technology it employed to protect drivers from possible collisions and accidents.

With a camera embedded in upper windshield glass, Grandeur detects lane departure and warns the driver by vibrating the steering wheel or maneuvers automatically to keep the car back on the track. The Lane Keeping Assist System, or LKAS, steers the wheel automatically even on a curved road, while the Advanced Smart Cruise Control keeps some distance from the car ahead.

The price of Grandeur in South Korea ranges from 30.5 million won ($26,000) to 38.7 million won, half the price of the luxury sedan offered by German carmakers here. Hyundai hopes to sell around 100,000 Grandeur units next year.

Despite Hyundai reconstructing the legacy with the new Grandeur, it is too bad that the carmaker is considering not to sell the latest model in the North American market. It is quite understandable, considering its drive to put the Genesis brand forward as well as Grandeur’s ambiguous position in US market. Named Azera there, Grandeur‘s sales performance was not good as it is being stuck in somewhere between the high-end and mass market, according to a company official. The South Korean carmaker has the Sonata to target the US mass market, he added.