[ The Korea Herald – Send E-mail ]
Professors unite against President Park
‘I am ashamed to see students at classroom’
By Jo He-rim
Published : Nov 27, 2016 - 17:10
Updated : Nov 27, 2016 - 17:51
Some 70 professors from Seoul National University joined the rally on Saturday calling for President Park Geun-hye to step down. This was the first time that the university professors participated in any kind of protest as a group since the massive democratic uprising in 1960.

“Professors have been taking part in the previous protests individually. This time, we decided to bring a stronger voice as a group,” Professor Yoo Yong-tae from the university told The Korea Herald.

He, who came with his wife, said he feels ashamed seeing students in classrooms.

“Many of the people involved in the scandal are or were professors. Most of those holding government positions will come back to university when they finish their jobs there, and it makes me angry.” 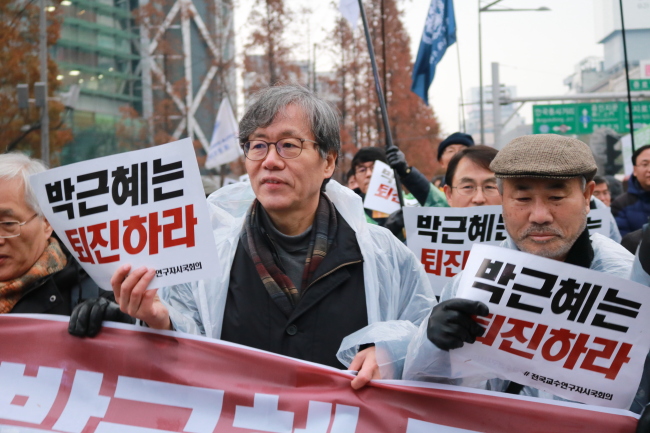 Professors hold a sign that reads "Park Geun-hye should resign" while marching to Gwanghwamun Square in central Seoul, Saturday. (Son Ji-hyoung/The Korea Herald)
On Nov. 7, 728 professors from SNU released a statement denouncing the president -- the largest number of professors to do so from one university.

Also at Saturday’s rally, 130 professors from other universities took to the streets to denounce the conservative president who is accused of allowing her long-time friend Choi Soon-sil to meddle in state affairs.

The professors gathered in front of Jongno Tower at 3 p.m. Saturday and held public speeches before joining the main candlelight vigil in the Gwanghwamun Square later in the evening.

In a declaration read at the gathering, the participants called for Park’s immediate removal from office.

“Park Geun-hye used a secret secretariat (to run the country) and has created panic. If Park wants things to return as normal, she must step down and receive the people’s judgment,” said Yang Hae-rim, a philosophy professor from Chungnam National University.

Many professors attending the rally also spoke out against some other controversial issues, such as the recently-sealed military intelligence sharing agreement between Korea and Japan and the state-designated history textbooks.

“The Park government has no authority to handle diplomatic issues now. It was an absurd agreement,” SNU Professor Yoo said.

On the textbook controversy, Professor Yang of Chungnam National Universitysaid: “The (state) textbooks should be discarded right away. It is only deceiving the growing youth of the country.”

The government faced huge backlash from the public last year when it announced that it would publish history textbooks compiled by the state. Despite the uproar it pushed ahead with the project. A preliminary version of the books are set to be released Monday.

Yoo also echoed disagreement. “The history textbooks are not something that the country can force on its citizens.”

Professor Kim Young from Inha University in Incheon lamented that universities nowadays have become “a subcontract factory” under the current administration.

“Productivity and quantity is more emphasized in our research and we are losing the core value of education. We should cut out the old practices and start anew, first by pushing Park out of office,” Kim said.

Last month, Ewha Womans University President Choe Kyeong-hee resigned after she was accused of giving Chung Yoo-ra, daughter of Choi, the president’s long-time confidante at the center of the corruption scandal, special treatment in the admissions process and for academic grades.

Last week, the Education Ministry, which conducted a large-scale on-site inspection of the university, confirmed most of the allegations to be true and requested that the authorities investigate the admissions process of Chung.

As of Sunday, 2,330 professors signed a statement by Professors for Democracy denouncing President Park, with more signatures expected to be collected.