The number of workers 50 years old and above hit the 10 million mark in Korea for the first time in the second quarter this year, as the aging population is reluctant to leave the workforce amid longer life expectancy, government figures showed Monday.

In the second quarter this year, there were 10.08 million senior workers, adding 272,000 more than the same period from the previous year, according to Statistics Korea. 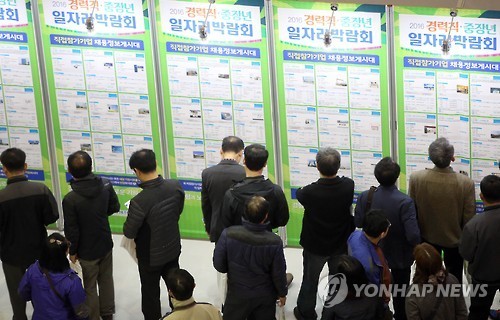 The proportion of seniors in the total workforce has been gradually increasing over the past decade.

The rapid increase is largely due to the growing population of the older generation, which includes Korea’s baby boomer generation who were born between 1955 and 1963.

“The baby boomers have failed to prepare for their postretirement life,” said Park Yoo-soo, a researcher at the state-run Korea Development Institute. “As a result, they still remain in the job market.”

The reason behind the lack of preparation for their postretirement life can be attributed to polarization in the Korean job market, Kim Yoo-bin, associate fellow with the Korea Labor Institute, told The Korea Herald.

“Those who earned low incomes and worked irregular jobs are likely to be the ones who are not ready for retirement and forced to stay in the workforce even after the retirement age.”

The average retirement age in Korea was 72.9 for men and 70.6 for women in 2014, according to the Ministry of Employment and Labor in July, meaning that Korean workers remain in the workforce seven to eight years longer than average among member countries of the Organization for Economic Cooperation and Development. South Korea’s legal retirement age is 60 years old for both men and women.