A British investment fund has submitted a letter of intent to a local court to buy cash-strapped STX Shipbuilding Co. and its French unit up for sale, industry sources said Tuesday.

The investment fund has offered to buy STX Shipbuilding and a 66.7 percent stake in its French unit, a deal valued at 1 trillion won ($852 million) in total, while French shipyard DCNS and two other foreign shipyards submitted initial bids for STX Shipbuilding only, which could fetch 100 billion won, the sources said. 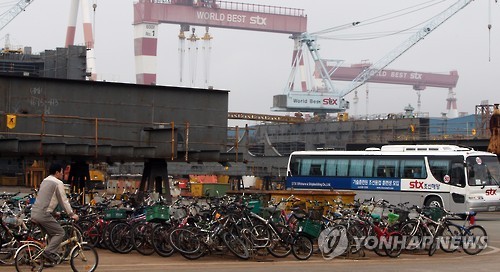 The fund is reportedly engaged in the cruise ship and leisure-related businesses, they said.

Potential investors are required to submit their final bids by Nov. 29.

Last week, a Seoul court approved a plan to resuscitate STX Shipbuilding, paving the way for the shipyard to survive on its own.

STX Shipbuilding, once the country's No. 4 shipbuilder, has been placed under court receivership since June, amid a protracted slump in the shipbuilding industry.

Despite over 4 trillion won in financial aid from its creditors, the shipbuilder logged an operating loss of 314 billion won last year following a loss of 1.5 trillion won the previous year.

STX Shipbuilding was once affiliated with the now-defunct STX Group that had a business portfolio that ranged from construction, and shipping to shipbuilding and energy.

It is one of the local shipyards that have been suffering massive losses due to delays in the construction of offshore facilities and an industrywide slump. (Yonhap)