Lee Byung-hun portrays a criminal organization’s maniacal leader who dons a myriad of disguises; Kim Woo-bin is an unpredictable genius hacker and the mastermind behind the organization’s operations; and Kang Dong-won stars as the head detective of a white collar crime investigation unit who doggedly pursues elusive villains.

“Things that shouldn’t happen, happen” in Korea today, according to director Jo Eui-seok, who was speaking at a press conference for the upcoming film in Seoul on Monday. 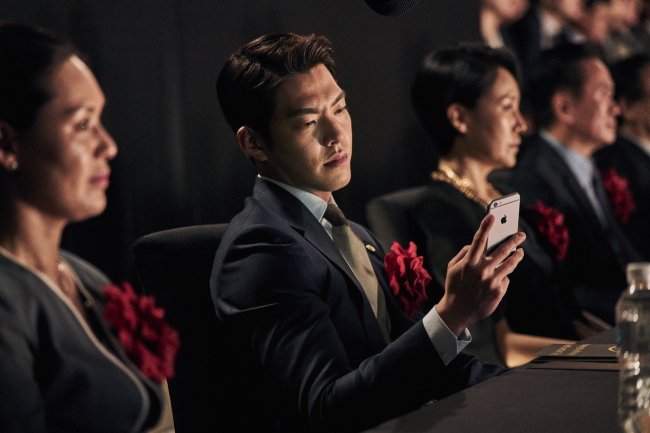 A still of the upcoming film “Master” depicts Kim Woo-bin as a criminal genius hacker. (CJ Entertainment)
“Master” is the latest in a series of crime flicks that do not feel too far from reality, depicting the messy tangle of corrupt politicians and criminals.

Last year’s “Inside Men” exposed backdoor ties between a ruthless presidential candidate, a gangster and a journalist who manipulates public opinion with his pen.

“Veteran,” also released last year, focused on a psychopathic chaebol heir who buys his way out of murder and equates “ordinary folk” with dogs. “Asura: The City of Madness,” which opened September, portrayed a demented world of power-mad politicians and corrupt cops.

In “Master,” the criminals -- dubbed “One Organization” -- funnel astronomic sums of money by lobbying high-ranking public officials and through online manipulation.

In an obvious reference to the ongoing political scandal involving President Park Geun-hye and her confidante Choi Soon-sil, the film’s tagline reads: “The biggest ‘gate’ since the country’s founding.” The scandal has been dubbed “Choi Soon-sil gate” here, after the Watergate scandal that rocked the US in the 1970s. 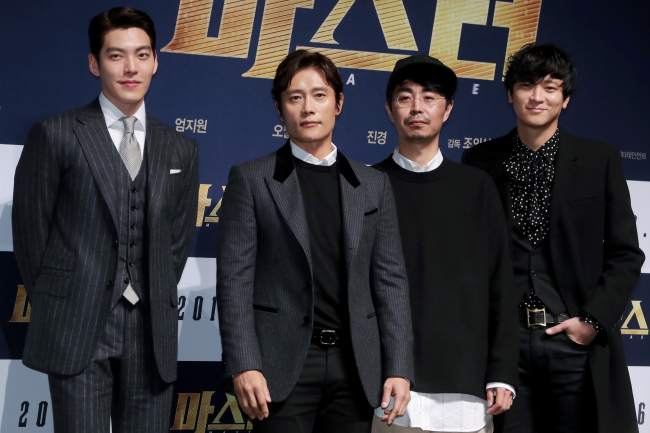 From left: actors Kim Woo-bin, Lee Byung-hun and Kim Woo-bin pose for a photo at a press conference for their upcoming film “Master” at CGV Apgujeong on Monday. (Yonhap)
Jo said he paid meticulous attention to the characters and the setting to add depth to the film. The organization’s hacking headquarters, for example, is filled with “endless, parallel rows of hackers typing away mechanically,” while the detective’s office is an “open space, with lots of lighting.”

Parts of the film were shot in Manila, where the Jones Bridge Highway, the city’s largest, was closed down for the shooting of a high-speed chase scene.

Filming also took place in Tondo, the largest slum in Manila, which added to the movie’s atmosphere of filth and squalor, according to Lee.

“There was a pig slaughterhouse nearby. It reeked of the smell of blood and rapid decay, due to the humidity,” said Lee. “And we filmed there for over a month, eating lunch in those streets.”

The actor, who recently starred in Antoine Fuqua’s “The Magnificent Seven,” is no stranger to depicting morally ambiguous characters, but this new role provided a different kind of challenge, according to Lee. 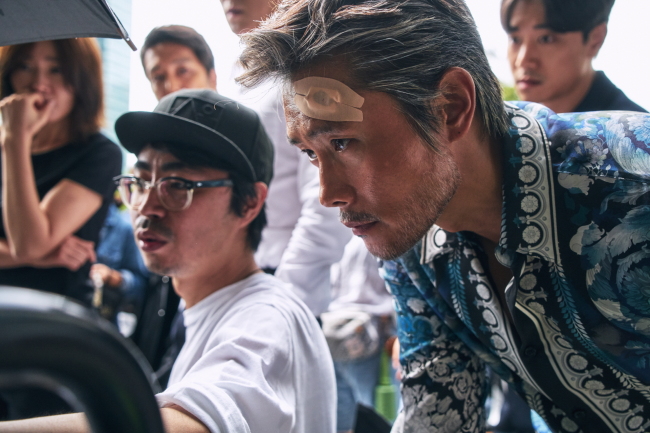 A photo depicts Lee Byung-hun monitoring his performance on the set of the upcoming film “Master.” (CJ Entertainment)
“I think these kind of people operate on a different kind of logic. They have their own, very stubborn philosophy of what’s acceptable and what’s not that’s different from common reasoning. I had to convince myself of that.”

The film seeks to deliver a sort of catharsis that “so many Koreans seem to (be in) need of right now,” Lee added. “There will be parts that are very satisfying.”

Director Jo previously helmed the 2013 thriller “Cold Eyes,” which follows a special surveillance unit as it tightens in on a most-wanted criminal organization.

“Master,” currently in the last stages of filming, is expected to hit theaters in December.