In the largest anti-government rally in decades, protestors flooded the streets running through City Hall, Gwangwhamun Square and Anguk Station, turning the area into a vast sea of candlelight in the evening. Streets just hundreds of meters from Park’s presidential residence of Cheong Wa Dae were also packed, with participants chanting “Park Geun-hye resign!” 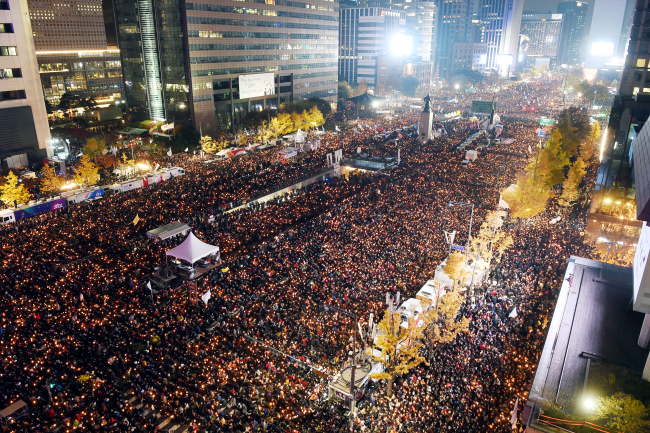 Protesters stage a rally on a thoroughfare in downtown Seoul on Saturday, demanding President Park Geun-hye resign. Joint Press Corp.
Organizers said over 1 million gathered for the protest, but the police’s estimate was 260,000.

At Cheong Wa Dae, lights were seen turned on deep into the night.

The embattled president watched Saturday’s colossal protest from her residence, while her staff, in a somber mood, discussed how to cope with the situation, sources at the presidential office said.

Many had expected Saturday’s rally to be a watershed moment for Park’s presidency in a crisis sparked by allegations that she let civilian friend, Choi, manipulate power from behind the scenes. Park’s approval ratings have sunken to an abysmal 5 percent, with a majority of people demanding her immediate removal from office.

While Cheong Wa Dae kept silent Sunday, political parties on both sides of the aisle were seen clearly affected by the overwhelming demonstration of public anger.

“The legislature must brace itself for a paralysis of the executive branch and lead efforts to put the nation back on track,” he said.

The main opposition Democratic Party of Korea upped the ante against Park, saying it was time for the president to face the music.

“President Park must heed the public’s call. Now the president must make up her mind, whether it is resignation or something else,” said Rep. Ki Dong-min, the party’s spokesperson.

Despite the gravity of the situation, Saturday’s protest was mostly peaceful, with many cultural events and impromptu speeches by ordinary citizens.

However, after the official rally was over, a violent clash erupted between police and hard-line protestors near Gyeongbokgung. Some 23 were booked for violence and several police officers were injured.

Simultaneous rallies were held across the country and overseas including the southern island of Jeju, Park’s hometown of Daegu, Brazil’s Sao Paulo and Helsinki, Finland. In Busan, a conservative stronghold, over 20,000 packed a shopping street in Seomeon, chanting “Park Geun-hye, out.”

The rally in Seoul was the largest in South Korea since the democratic uprising in June 1987. It showed that public rage toward the conservative president continued despite her two televised apologies and a series of reform gestures.

Park’s longtime friend Choi, now arrested, is accused of using her ties with the president to enable her close associates to take positions at government agencies, extort funds from big businesses and allow her horseback rider daughter to receive preferential treatment from school and sports authorities.

A series of revelations increasingly implicate Park in the fundraising activities and state prosecutors are said to be considering questioning Park in person in the coming week.

The president has apologized for allowing her guard to drop in her relationship with Choi, but has distanced herself from Choi’s alleged influence-peddling and embezzlement of public funds for personal gain.