[ The Korea Herald – Send E-mail ]
Military holds policy assessment meeting after Trump's surprise win
By KH디지털2
Published : Nov 10, 2016 - 14:15
Updated : Nov 10, 2016 - 15:16
South Korea's military held an emergency meeting on Thursday to assess the possible impact of the Donald Trump presidency on its decades-old alliance with the United States that has been critical in maintaining peace on the Korean Peninsula.

At the meeting, civilian leaders and the military's top brass reviewed potential U.S. defense policy changes that may occur between Washington and its Asian ally.

"We are planning to set up a task force to help push forward major defense agreements with the U.S. despite the change in the U.S. administration," a defense ministry official said.

The official said the ministry will make utmost efforts to ensure that existing agreements between the allies will be carried out as planned.

"We will seek a close communication with U.S. lawmakers in charge of defense policies toward the peninsula and the Asia-Pacific region in the Trump administration," he said. 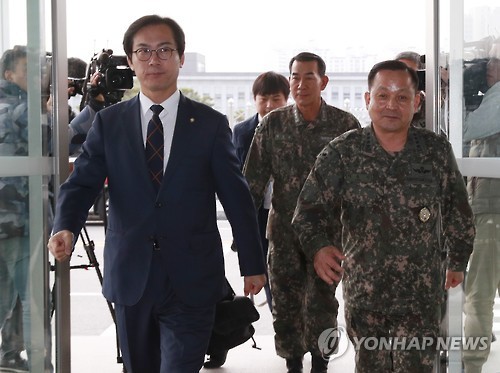 A photo taken Nov. 10, 2016, Rep. Kim Young-woo (left) a ruling Saenuri Party lawmaker who heads the National Defense Committee in parliament, and Joint Chiefs of Staff Chairman Gen. Lee Sun-jin walk into the JCS headquarters in Seoul to attend an emergency meeting to discuss defense issues. (Yonhap)
The agreements involve the conditions-based transfer of the wartime operational control of South Korean forces from Washington to Seoul, the planned deployment of the Terminal High Altitude Area Defense system in South Korea, and permanent deployment of its strategic assets to the divided peninsula.

On Tuesday, Trump was elected as the 45th president of the United States in a stunning victory that reflects deep voter resentment against the establishment.

His remarks during the campaign caused deep concerns from longtime U.S. allies such as South Korea, Japan and Europe.

Trump, a businessman turned politician, has sometimes referred to allies as a cumbersome burden sucking up taxpayer dollars. He has even suggested arming South Korea and Japan with nuclear weapons so as to reduce U.S. security burdens.

The 70-year-old has also argued that South Korea must 100 percent pay for the cost of maintaining the 28,000 American troops stationed in the country, warning Washington could pull out of the Asian alliance unless Seoul agrees to pay more.

If Trump follows through on his comments made during the campaign, it could be disastrous for the Seoul-Washington relations, analysts here said. (Yonhap)