[ The Korea Herald – Send E-mail ]
[From the scene] Public anger at its peak in massive rally
By Ock Hyun-ju
Published : Nov 5, 2016 - 21:45
Updated : Nov 6, 2016 - 15:16
Tens of thousands of people took to the streets in central Seoul on Saturday to demand President Park Geun-hye’s resignation over a spiraling scandal involving her confidante Choi Soon-sil. 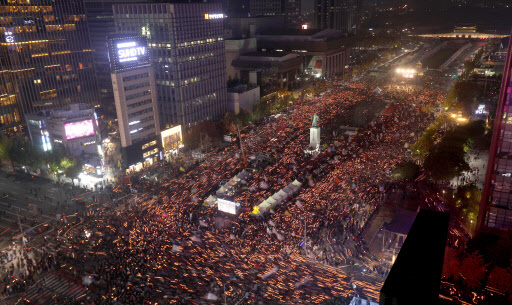 Tens of thousands of people gathered at Gwanghwamun Square, central Seoul, on Saturday to demand President Park Geun-hye step down over the influence-peddling scandal involving her confidante Choi Soon-sil. (Yonhap)
Some 200,000 people flocked to Gwanghwamun Square in the evening, according to organizers, signaling undying public anger toward President Park despite her second televised apology a day earlier. The police estimate was 43,000 people.

The second massive rally since the Choi Soon-sil scandal surfaced was bigger than the first one held last Saturday that organizers said had drawn about 40,000 people. 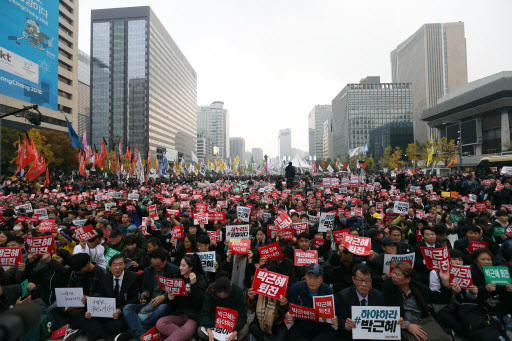 Tens of thousands of people gathered at Gwanghwamun Square, central Seoul, on Saturday to demand President Park Geun-hye step down over the influence-peddling scandal involving her confidante Choi Soon-sil. (Yonhap)
Young students took center stage in the rally, with middle school, high school and university students condemning the president for letting a civilian friend meddle in state affair. They vowed to “save” the country. 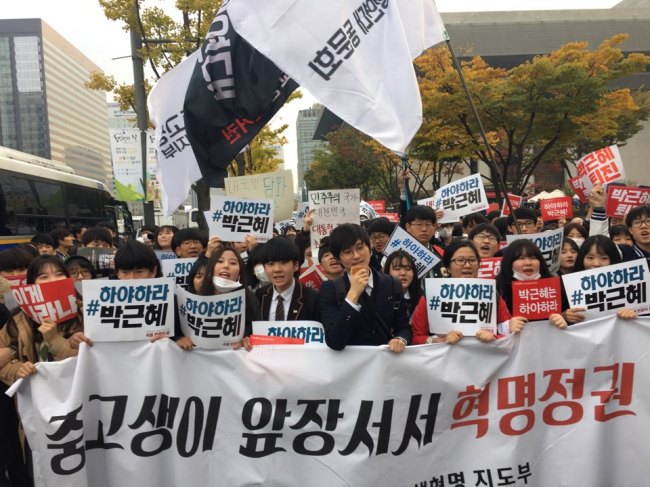 Middle school and high school students march across Gwanghwamun Square in central Seoul, Saturday, calling for President Park's resignation. (Ock Hyun-ju/The Korea Herald)
“I am mad that an unelected individual ruled the country behind the scenes. It is a regression of democracy that we have learned,” said Cho Ji-hun, a 18-year-old student. “I thought I would regret it if I did nothing in this seriously sad situation.”

As hundreds of students in school uniform paraded through main road in Gwanghwamun area chanting “Park Geun-hye, step down” and singing a national anthem ahead of the rally, they received a round of applause from fellow protesters.

“Looking at young students taking to the streets, I am so ashamed and embarrassed about myself and people from our generation,” said Lee Seong-kyun, a 65-year-old retiree, who joined anti-Park rally for the first time. “We (adults) let this happen by not taking action earlier.”

“The apology she made further disappointed me. She denied her part in the scandal, shifting all the blame to Choi Soon-sil,” he said. “Park should voluntarily step down and be investigated.”

Park apologized for allowing her guard to drop with Choi Soon-sil and for her role in a “heartbreaking” political scandal, but distanced herself from Choi’s alleged influence-peddling and embezzlement of public funds for personal gain.

Park said she would accept prosecutorial questioning if necessary, hinting that she would not step down.

Despite being organized by labor unions and civic groups, the rally drew a lot of unaffiliated citizens who came with their family and friends to express their frustration.

They chanted “Park Geun-hye, step down” or “The owner of this country is the Korean people,” with many holding candles and carrying anti-Park placards. 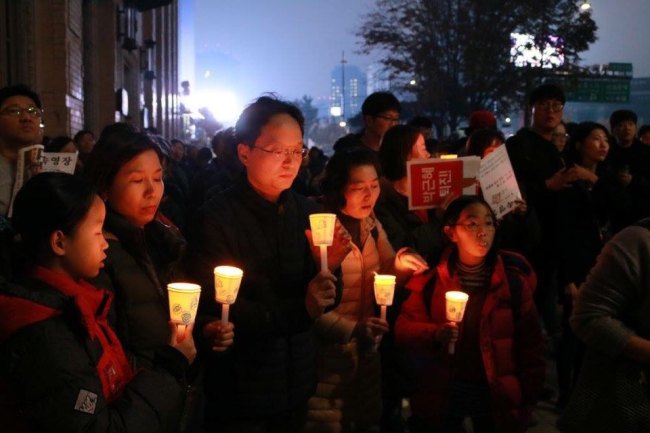 Family members hold candles during the anti-Park Geun-hye rally held at Gwanghwamun Square, central Seoul, Saturday. (Son Ji-hyoung/The Korea Herald)
“I came here not to feel ashamed in front of my children. I have never participated in a rally, but I could not just see the president further ruining this country,” said Park Je-hee, 37, who brought her 3-year-old and 5-year-old children from Suwon.

Park said that Park’s apology made her only angrier. “President Park does not seem to know what a real problem is. Does she think Koreans are a bunch of idiots?” 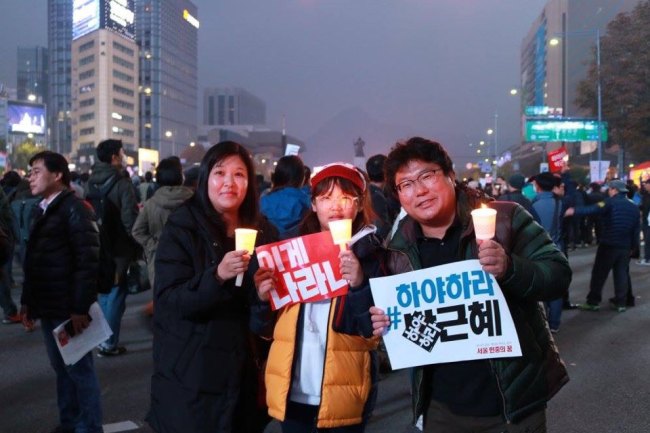 As dusk gathered, protestors began to march 3.7 kilometers across central Seoul after a local court ordered the police to cancel their ban on the rallying march earlier in the day.

“I am shocked about how Park has ignored the Korean people. She does not seem to understand that she was only elected to represents us,” said Kim Ji-won, 25, while marching with her parents. “This rally might not be able to change the situation right away, but we are showing the power of people.”

Police dispatched some 20,000 officers in central Seoul to maintain public order. They built barricades with police buses in an apparent attempt to block the protestors from marching toward the presidential office. 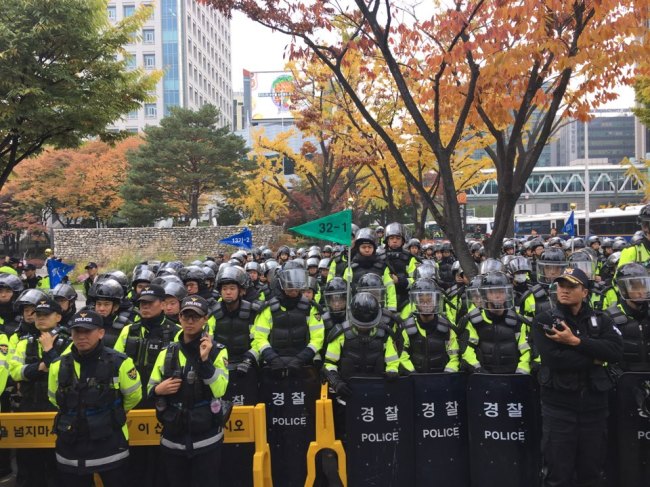 Police officers line up to stop protestors from marching toward the presidential office. (Ock Hyun-ju/The Korea Herald)
As in last weekend’s rally, the police appeared to avoid provoking protestors and using violence, mindful of possible public backlash. There were no water cannons deployed at the scene.

The rally was held in a peaceful manner, without many clashes or injuries.

However, Joo Ok-soon, the head of a right-wing civic group, was brought in for questioning after allegedly assaulting a 15-year-old student for taking a picture of her. She was there to stage a rally in support of President Park.

A 59-year-old man, surnamed Lee, was also nabbed after marching along the street with a knife and threatening leaders of the Justice Party.

The anti-Park rally coincided with the funeral for Baek Nam-gi, a 69-year-old activist farmer, who died after being knocked down by a police water cannon during an anti-government rally a year ago. 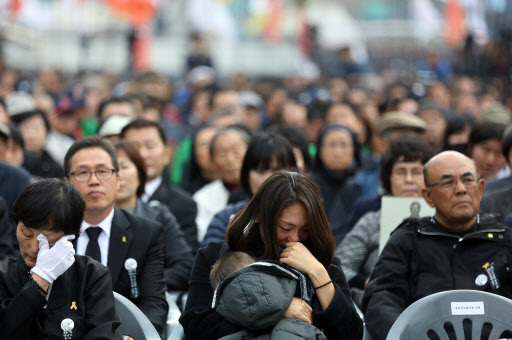 Thousands of citizens were seen paying respect to the deceased at a send-off ceremony in Gwanghamun Square ahead of the rally. Some 30 lawmakers from the opposition bloc joined the event.

“We are holding the funeral for my father at last, thanks to many Koreans who have fought alongside us since my father was hit by the water cannon blast last year,” Baek’s eldest daughter Baek Do-raji said in a letter. “As those responsible for my father’s death have not even been indicted, this is just a beginning of our fight for justice.”

The bereaved families are asking for a special investigation into Baek’s death. 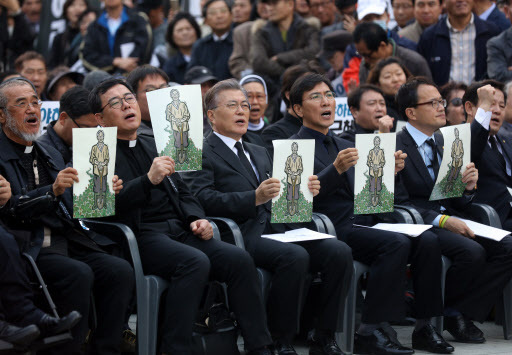 “A murderous water cannon blast knocked you down and took your life. It is clearly a crime committed in the name of the public authority,” Park said in a letter addressed to the deceased.

The funeral had been delayed for more than a month amid controversy over the police’s decision to conduct an autopsy to determine the cause of death. The police withdrew the plan in the face of opposition from Baek’s bereaved family and civic groups.