The two firms signed a memorandum of understanding in Seoul last Thursday, pledging to cooperate for the development of “Vehicle-to-Everything,” or V2X, technology as well as video recognition based on deep learning, a form of artificial intelligence, SKT said. 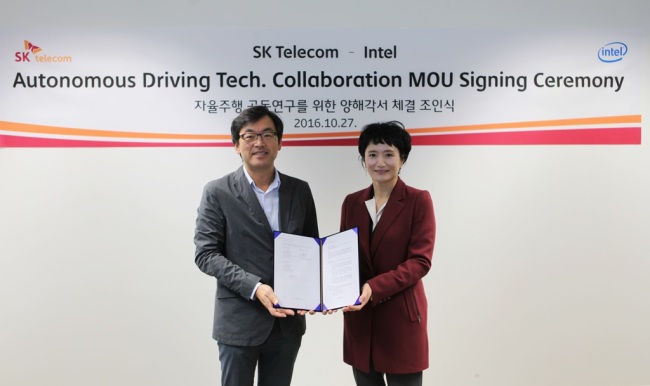 The chief of SK Telecom’s Corporate R&D Center Choi Jin-sung (left) and Intel Korea CEO Kwon Myung-sook sign a memoradum at the SKT headquarters in central Seoul on Oct. 27 (SK Telecom)
V2X refers to technology embedded in connected automobiles that lets cars communicate with any entity that may affect it, including other cars, road sensors and pedestrians. It is considered a core element of connected cars and self-driving vehicles.

Deep learning technology attempts to mimic the neural activity of the human brain to learn to recognize patterns among digital representations of sounds, images and other data.

This form of machine learning can improve an autonomous car’s ability to recognize the movement of other cars and passengers via enhanced video recognition capabilities, SKT said.

Under the memorandum, SKT will provide its video recognition technologies as well as network services for connected cars while Intel will offer its 5G modules, base stations and deep learning platform.

“Through this partnership with SKT, we hope to create an innovative autonomous vehicle service business model,” Intel Corp. Vice President Aicha Evans said in a statement.

The two firms plan to build and present a working model of a self-driving vehicle running on their co-developed technologies by 2017, SKT said.