Lee Sang-hyun, a senior researcher at the Sejong Institute, introduced the interim findings of a comprehensive joint study involving more than 10 diplomatic and security specialists as well as nuclear scientists, economists and psychologists during a seminar hosted in Seoul by the Presidential Committee on Unification Preparation.

In the paper, the team estimated that the communist state held up to 50 kilograms of plutonium and around 300 kilograms of highly enriched uranium. 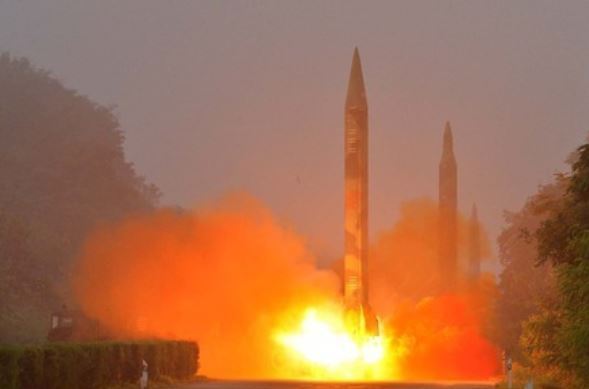 “North Korea is likely to be able to build four to eight small nuclear weapons every year, meaning that its stockpile could possibly grow to 79 or more by the end of 2020 while mastering means of their delivery,” Lee said.

The projection paints a more advanced scenario of the Kim Jong-un regime’s bomb production capabilities than other assessments, though some put estimate the North could make as many as 100 bombs over the same time frame.

Early last year, Joel Wit of the US-Korea Institute at the Johns Hopkins University in Washington said the North could have 10 to 16 weapons now, with six to eight of them made from plutonium and four to eight from uranium.

To prevent the forecast from becoming reality, South Korea and the US need to focus on sharpening their long-term strategies, along with their ongoing sanctions drive.

“Our short term outlook is gloomy, as Kim Jong-un would unlikely turn to denuclearization negotiations nor give up his nuclear program for now,” Lee said.

“The issue may require a multilayered longer term setup aimed at making the regime choose a nuclear-free economy over its current parallel pursuit of nuclear and economic development, while in the short- and mid-term concentrating international strengths on applying effective sanctions and pressure.”

With Beijing’s formidable sway as Pyongyang’s lifeline, Washington should step up pressure on China to tighten the economic noose on its cash-strapped neighbor, he added, referring to the US’ recent blacklisting of Dandong Hongxiang Industrial Development, an industry machinery wholesaler, for providing financial services and illicit supplies to the regime.

“While many Chinese opinion leaders see North Korea as a strategic asset, my assessment is that more people are regarding it as a strategic burden,” Chung said in his welcoming remarks.

“Such a phenomenon is increasingly spreading among high ranking officials and it would only accelerate as North Korea spurs its nuclear development.”

Choi Jong-kun, a professor in political science and international studies at Yonsei University in Seoul, stressed the importance of consistency in Seoul’s North Korea policy that has long been subject to “ideological strife and political feuds.”

Over the last 20 years, South Korea’s approach has been widely oscillating in line with leadership changes, with earlier two liberal administrations pushing for reconciliation and the latter two conservative presidents taking hardline stances.

“In pursuing a long-term resolution of the issue, we need continuity in denuclearization policy,” Choi said.

“A coolheaded, realistic approach and meticulously-crafted strategies are vital to effectively setting in motion any mid- and long-term roadmap on denuclearization. It would also prompt a chance for soul searching about populism and slogan-heavy policies.”