“After the preannouncement of the revised rule (about the penalty on illegal abortions), various sectors in society have given their opinions. We decided to consider possibly nullifying the tougher punishment plan,” a ministry official said. 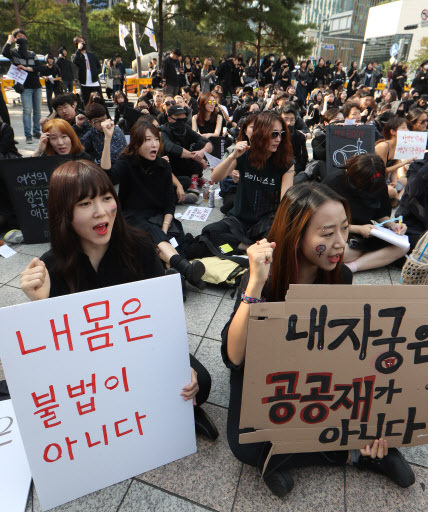 Participants shout slogans condemning the government’s plan to toughen punishment for illegal abortions during a rally in central Seoul on Saturday. (Yonhap)
A final decision may come as early as Wednesday, after a consultation meeting with private experts, the official said.

The ministry had sought to revise a rule regarding the punishment of doctors for inappropriate medical practices, to toughen the penalty on illegal abortions -- from the current one-month suspension of business to a maximum of one year.

South Korean law bans abortions, except in cases of rape, incest, severe genetic disorders or a woman’s health endangered by pregnancy. The allowed cases of abortion should be performed within 24 weeks of pregnancy.

The law, however, is rarely enforced.

For the past six years, only 23 cases of illegal abortions were reported to the authorities. During the period, over 1 million abortions are believed to have been carried out in South Korea.

The ministry’s plan to introduce a tougher penalty sparked strong protests from women’s organizations, with over 400 people dressed in black staging a rally at the center of Seoul on Saturday. The protesters called out for their right to autonomous decisions and demanded the government to retract its plan for stricter rules on abortion.

The obstetrician association also slammed the government, arguing it is being blind to reality.

“The government’s stronger measures do not reflect current society. It is only blaming doctors for increasing abortion cases,” the Korean Association of Obstetricians and Gynecologists said.

The government had not discussed the issue with any medical organizations, it claimed.

Experts also said that the government gave little consideration to the sensitivity of the issue. A clampdown on abortions requires social consensus, or at least efforts to achieve one, they said.