“We are confident that the Chevrolet Trax, equipped with new design, safety features and specifications, can strongly appeal to the customers,” James Kim, CEO of GM Korea said at the media event in southern Seoul. “The compact SUV segment, which Trax is included in, will continuously grow.” 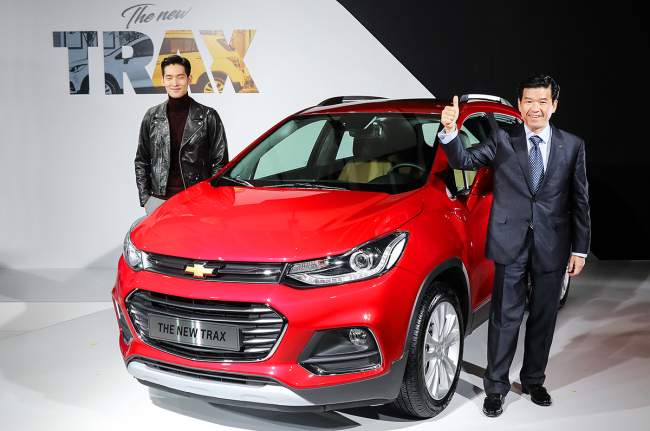 James Kim, CEO of GM Korea (right) poses with the new Trax at a media event on Oct. 17 in southern Seoul. GM Korea
The facelift version of Trax, which is built in South Korea, highlights a more athletic and contemporary design inside and outside than the predecessor released in 2013. The sleek exterior is incorporated with the brand’s signature dual-port grille, new headlamps and LED taillights.

The latest Trax’s retail price has been cut by 1.25 million won to start at 18.45 million won (US$16,209) for the lowest trim level, about 1 million won cheaper than its competitors Ssangyong Motor’s Tivoli and Kia’s Niro.

The 1.6 diesel model has a maximum 135 horsepower with 32.8 kilogram-meters of torque and a fuel efficiency of 14.7 kilometer per liter. GM Korea offers five trim levels for diesel models, with price ranging from 20.85 million won to 25.80 million won.

The petroleum model is powered by a 1.4-liter turbocharged four-cylinder engine putting out 140 horsepower and 20.4 kilogram meters of torque and a fuel efficiency of 12.2 kilometers per liter. It also comes in five trim levels, with price ranging from 18.45 million won to 23.90 million won.