[ The Korea Herald – Send E-mail ]
[From the scene] Hundreds take to streets against tougher punishment for abortion
By Ock Hyun-ju
Published : Oct 16, 2016 - 17:08
Updated : Oct 16, 2016 - 17:36
Hundreds of people dressed in black marched across central Seoul on Saturday afternoon to oppose tougher punishments for illegal abortions proposed by the government nearly a month ago.

In the South Korean version of the so-called “black protest” that swept through Poland in early October, an estimated 300 protestors staged a rally in front of Bosingak Bell at the heart of Seoul, demanding that the government scrap its stricter abortion ban.

“I oppose the government taking control of women’s reproductive rights and freedom to choose what to do with their body,” a 23-year-old activist, who wanted only to be identified as Mullgam, told The Korea Herald as she participated in the march.

“It only shows the low social status of Korean women, who are discriminated against and seen as a reproductive tool for male citizens in society,” she said. “When women give birth to unwanted babies, who will take responsibility for them and the babies?”

She also criticized the existing rule that requires the father’s consent, even for legal abortions, saying that women should be able to have abortions out of their own will. 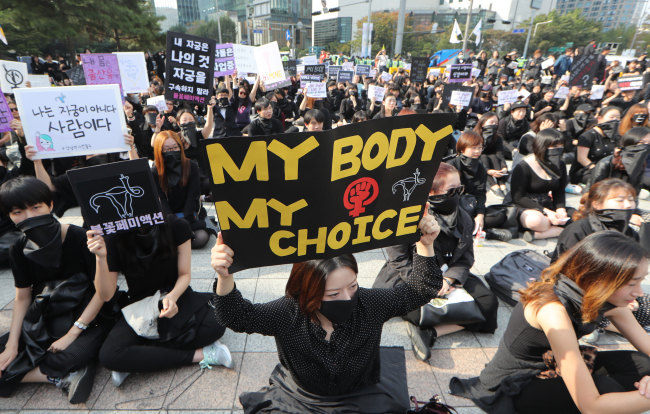 Participants shout slogans condemning the government’s plan to toughen punishment for illegal abortions during a rally in front of Bosingak Bell in central Seoul on Saturday. (Yonhap)
Abortion is legally prohibited in South Korea except in cases of rape, incest, a threat to a pregnant woman’s health, or when a baby is potentially disabled. However, all abortions -- no matter the circumstances -- are illegal after 24 weeks of pregnancy.

Under the slogan of “My womb, my body,” the protestors, who appeared to be mostly women and in their 20s and 30s, were seen wearing black clothes, with half of their faces covered in black scarves to shun attention from “woman haters.”

The demonstration came amid mounting controversy over proposed tougher crackdowns on illegal abortions. According to the revision to the Mother and Child Act proposed by the Ministry and Health and Welfare, doctors who perform illegal abortions could face a suspension of business for up to one year instead of one month.

The plan triggered resistance from the Korean Association of Obstetricians and Gynecologists, with the members of the doctors group vowing to stop performing the procedure unless the government withdraws the plan.

Women’s organizations lashed out at both the Health Ministry and the KAOG for holding women hostage without reflecting their opinions in the decision-making process.

“The government has encouraged abortions in the past, but it now strengthens punishment for women getting abortions in order to raise the birthrate,” said another activist Seo Ga-hyeon. “The government shifting its abortion restrictions depending on population planning policies is just a sign that it sees women as baby breeding machines.”

During the two-hour rally, the participants sang songs and chanted slogans such as “There is no sex when there is no condom,” “Women are not baby breeding machines,” and “Stop criminalizing abortion.”

“I was born from a single mother. I have never seen my biological father,” said a 20-something woman who came from Busan to take part in the rally. “My mother sometimes told me that she regrets giving birth to me. So I think that women have the right to live life as they want.”

Artist Hong Seung-hee shed tears before the crowd while sharing her experience of getting an abortion.

“I myself had an abortion in May. I felt depressed and isolated. I was accused of murdering a baby and having no affection for my child,” she said. “But I have never murdered anyone. I didn’t want to be pregnant. I am a woman, wife and mother, but most of all, I am a human being.”

“My womb is not public property that can be controlled by the government,” she added.

Women who get illegal abortions are subject to a prison term of up to one year or a fine of 2 million won ($1,760), but men are excluded from such punishment. Doctors who perform the procedures face up to two years in prison.

Despite the ban on abortions, the medical industry estimates that some 200,000 abortions are conducted each year, with only 5 percent of them being legal.

“It is unfair that men and women are both responsible for being pregnant, but only women are punished by law,” said a 27-year-old man. “It seems that Korea has achieved gender equality, but in reality, gender stereotypes haven’t really changed.”