[ The Korea Herald – Send E-mail ]
Advisory body calls for US tactical nukes as it meets with Park
By Shin Hyon-hee
Published : Oct 13, 2016 - 16:50
Updated : Oct 13, 2016 - 17:19
President Park Geun-hye’s advisory panel on unification policy has proposed a reintroduction of US tactical nuclear weapons and the constant stationing of other advanced strategic assets on the peninsula as deterrence against North Korea’s evolving threats.

In a recent paper, the National Unification Advisory Council made an array of policy suggestions, raising the need to better utilize top-notch US weapons systems such as the F-22 stealth fighter and B-2 nuclear bomber.
On home ground, Seoul should bring forward the establishment of its own Kill Chain and Korea Air and Missile Defense pre-emptive strike schemes, which are currently scheduled for the early 2020s to be used with the US Terminal High Altitude Area Defense anti-missile system expected to be deployed here late next year. 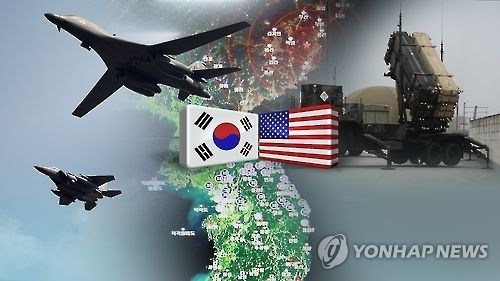 (Yonhap)
“To explore the reinstatement of US tactical nuclear weapons and the permanent placement of some state-of-the-art US strategic assets inside the South could serve as pressure on not only North Korea, but also China over its sanctions against the North,” the report reads.

“(During the Cold War,) the US’ deployment of Pershing II missiles in Europe against the then Soviet Union’s SS nuclear-equipped missiles helped place the Soviet on the defensive in their strategic weapons race and eventually served as a factor behind its collapse.”

The NUAC also called for a comprehensive scheme to overhaul the impact of international sanctions against the communist state such as by creating a new expert group here apart from the UN mechanism.

If Pyongyang carries out further provocations, additional steps should be taken to bar civilian trade and the dispatch of workers overseas as well as expand the blacklist of individuals and entities, it said.

Presided over by the president, the council writes a quarterly paper to be submitted to Cheong Wa Dae, which contains a set of policy suggestions drawn up through discussions and deliberations among experts. The latest report was handed over late September, officials said.

Later on Thursday, Park met with 530 international members of the panel from 92 countries, who were gathered in Seoul for a four-day conference.

A focal point is whether she will look at the proposed ideas afresh, despite having reaffirmed Seoul’s commitment to a nuclear-free peninsula.

Since Pyongyang’s fourth and fifth nuclear tests this year, some senior lawmakers and analysts have been calling for the allies to bring tactical nuclear weapons here, if Seoul is not to take the path toward its own nuclear armament.

Choi Kang, vice president of the Asan Institute for Policy Studies in Seoul, said that any armament move would face extreme difficulty in gaining acceptance worldwide and could also bring political, diplomatic, economic and military repercussions to Seoul.

“South Korea should constantly emphasize that it will not need to build nuclear weapons if the US guarantees its extended deterrence in a more concrete and practical manner, but if not, it will inevitably be placed in a position (of having) to pursue its own bomb-making capabilities,” he wrote on the think tank’s blog Thursday.

“Meanwhile, South Korea may argue for the redeployment of tactical nukes starting with the hosting of dual capable military assets.”