[ The Korea Herald – Send E-mail ]
North Korean defectors open up online
Young escapees take to live webcasts, seeking to tear away at South Koreans’ prejudices
By Rumy Doo
Published : Oct 11, 2016 - 16:58
Updated : Oct 11, 2016 - 17:27
A trendy haircut, eyebrow piercings and a tattoo sleeve on his arm -- nothing about online personality Lee Pyung’s current appearance betrays the fact he was born under a totalitarian regime. But he was, Lee reveals in his live webcast series, 23 years ago in the city of Chongjin, North Hamgyong Province, North Korea.

Lee made it to Korea in 2004, after bribing North Korean border guards, crossing into China, being imprisoned there, hiding in the Mongolian plains and being picked up by the National Intelligence Service at the Korean Embassy in Ulaanbaatar, Mongolia -- alone at the age of 11. In Seoul, Lee reunited with his parents who had defected when he was 3.

Lee is one of a handful of 20- and 30-something North Korean defectors who have recently begun telling their stories on Afreeca, an online streaming platform where broadcasters -- called broadcasting jockeys, or BJs -- earn money according to the number of viewers. If existing TV shows spotlighting defectors, such as “Now on My Way to Meet You” which began airing in 2011, showcase scripted versions of North Koreans’ plights, Lee’s live streams tell more candid stories of life above the peninsula’s 38th parallel and aim to “relate to young people.” 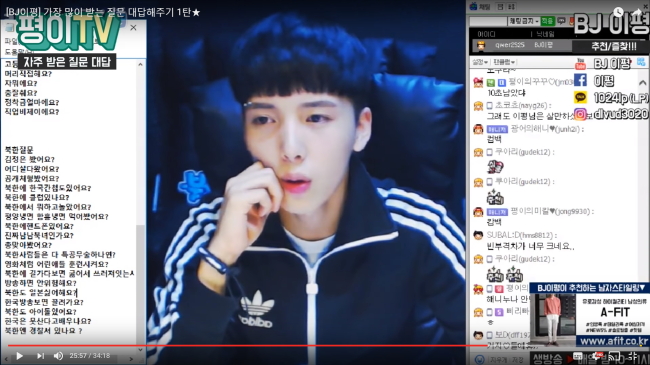 A screenshot shows online broadcasting jockey Lee Pyung, who defected from North Korea in 2004, answering viewers’ questions about life in the North in a video clip. (YouTube)
“South Koreans’ perceptions of North Korea are a lot different from what I know about the country,” said Lee in a webcast last month, also uploaded to YouTube. He has received all sorts of questions from viewers, including “Do North Koreans really eat human flesh?” and “Is everybody trained to be a spy?” which he’s called “outrageous.”

Lee began streaming online because he “wanted to change the stereotypes of North Korean defectors, especially among the younger South Korean generation who are less familiar with North Korea.”

He hated that many South Koreans seemed prejudiced against defectors, viewing them as “poor” or “fanatical communists.”

The young escapee’s stories seem to have found an audience. Since his online debut in May, Lee has made on average 5 million won ($4,460) per month, with last month’s earnings soaring much higher. His YouTube video detailing how he escaped has attracted over 1 million views. He works out of a streaming studio, equipped with a computer, camera and microphone.

In his videos, Lee answers viewers’ questions about the North. Some clips feature lighthearted anecdotes on catching dragonflies in undeveloped fields as a child and growing up in Chongjin, the country’s third largest city (“It has buildings and everything”), and lessons on North Korean words. Others detail how people are forbidden from wearing contact lenses or miniskirts, and how the North’s educational propaganda depicts the South as “a bad place full of refugees and gangsters.”

Some stories relay the more gruesome reality of the world’s most isolated state. As a child, Lee frequently witnessed public executions that took place in his schoolyard -- “I’ve seen countless bodies. Seeing people dying, seeing corpses was an everyday thing,” he said.

Since settling in the South, Lee has “fit in extremely well” with his peers, he said. With a keen interest in fashion, he learned hairstyling at a college before becoming a full-time BJ.

Son Bom-hyang, 29, is another defector who has been active as a BJ for two years. Her turbulent story of how she escaped at the age of 10 -- which involves imprisonment in China, a sibling passing away and stealing food from fields to not starve -- has over 2 million views on YouTube. Son, too, addresses the audiences’ many curiosities, which range from “Do you really have portraits of Kim Il-sung and Kim Jong-il in every household?” (yes) to “What kind of TV shows do you have there?” 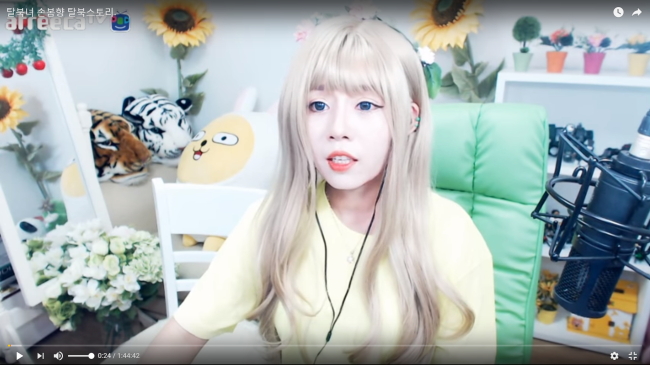 A screenshot shows online broadcasting jockey Son Bom-hyang, who defected from North Korea 10 years ago, answering viewers’ questions in a video clip. (YouTube)
But Son additionally uploads clips of how she’s settled into her life here, often engaging in “meokbang” -- where hosts broadcast themselves eating food -- with her husband of three years.

“In live streams, we can ask defectors things we’re curious about and get immediate, honest answers,” said Park So-hee, a 25-year-old university student who has seen many of Lee Pyung’s broadcasts. “We’re communicating directly and talking casually, so it feels more real.”

The webcasts have stripped Park of her former prejudices, she said. “I used to think defectors were brainwashed people I had nothing in common with. ... I may even have been scared of them being violent or something. But now I understand that they came here because they wanted to. They like the same things I do.”

Hundreds of comments written by viewers online reveal similar responses. One viewer said, “I now want to make an effort to befriend my North Korean defector classmate at school.” Another talked about how interesting it was to peek into everyday life in the North.

With some 30,000 North Korean defectors in the country as of June, according to the Unification Ministry, and generations that remember nothing of the Korean War and its aftermath, online platforms are an engaging way to inform young people on the realities of North Korea, according to Jang Yong-seok, a senior researcher at Seoul National University’s Institute for Peace and Unification Studies.

“In the long term, I think these activities will contribute to mitigating the tension between the two countries’ peoples, at the very least,” he said.

In the short term, however, as more and more defectors take to the screen, both on TV and online, unreliable testimonies of North Korea have run amok, Jang noted.

“There’s no way to check the facts,” said Jang, who previously worked at a Blue House committee on unification. Some scripted programs, intent on nabbing viewers, tend to sensationalize stories about the North, he commented.

“The more exposure defectors get on the media, the more we should make sure we’re circulating facts.”