South Korean lawmakers are poised to grill CEOs of four tobacco companies operating in the country over their suspected tax evasion during a parliamentary audit this week, industry sources said Tuesday. 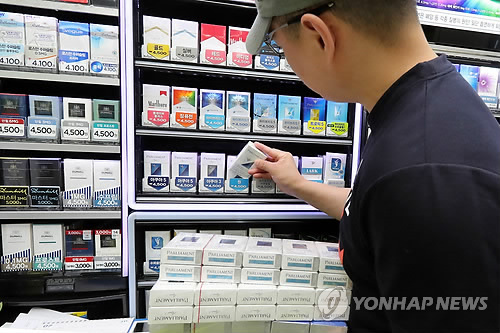 According to the sources, the National Assembly's safety and administration committee has summoned the CEOs -- Baek Bok-in of KT&G, Chong Il-woo of Philip Morris Korea, Tony Hayward of BAT Korea and Steve R. Dyer -- as witnesses over the alleged tax evasion during the audit Wednesday.

It will mark the first time for the CEOs of the four cigarette companies to testify simultaneously at a parliamentary audit. Of the four, Chong and Hayward will also appear for Thursday's audit by the Assembly's planning and finance committee.

According to the sources, lawmakers are expected to relentlessly question the CEOs over how the tobacco companies pocketed huge profits and whether they evaded taxes in the process.

Citing the need to discourage smoking, South Korea marked up taxes levied on cigarettes by 2,000 won ($1.8) in January last year, raising the price to 4,500 won per pack.

Cigarette makers are said to have raked in tens of millions of dollars in so-called inventory profit by keeping products manufactured before 2015 in stock and selling them after the tax hike for a huge gain.

Late last month, the Board of Audit and Inspection said Philip Morris Korea and BAT Korea had evaded about 200 billion in taxes on earnings from the tobacco tax hike in January last year, calling on the National Tax Service and other related government agencies to come up with a way to impose penalties on them. (Yonhap)