Local authorities and the industry are on high alert for a possible crisis in freight handling nationwide, as a separate strike by rail workers has been hampering railway transportation for the past two weeks.

“Cargo transportation is processing smoothly despite the strike,” said a task force team under the Transport Ministry.

The government has secured substitute transportation measures including 100 military container trucks and 200 unregistered private cargo trucks, it said. The ministry had expected that a third of daily cargo transportation could be affected -- 12,112 twenty-foot equivalent units out of the average of 37,650 per day. One twenty-foot equivalent unit refers to a cargo container that is 20 feet, or around 6 meters, long. 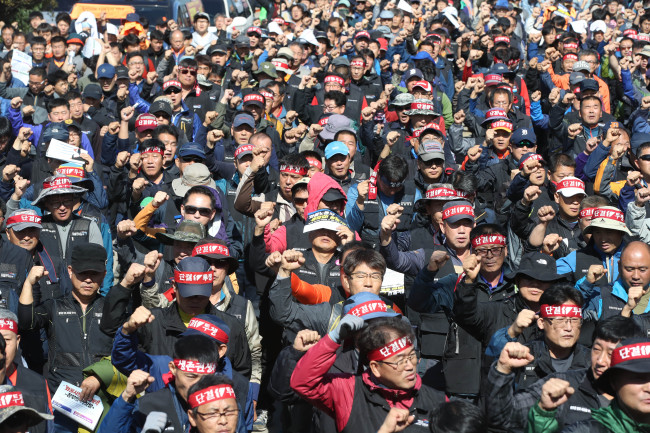 (Yonhap)
The truckers on strike are members of a labor union under the umbrella Korea Confederation of Trade Unions. Mostly container truckers, they are protesting against the government’s plan to allow more small freight trucks to operate, as they fear that it would lead to a cut in freight rates.

“The government will sternly deal with this strike in accordance with the law and its principle,” he said in a public statement.

Over 3,900 union members held rallies in Uiwang, Gyeonggi Province, and the port city of Busan. Some 5,000 police officers were dispatched in anticipation of possible violence and illegal occupation of the sea terminals.

At least 15,000 union members, excluding non-member strikers, have joined in the walkout, the labor group claimed.

Adding to the ongoing two-week long rail workers’ strike, the truckers’ actions -- even with its low participation rate -- is feared to have an impact on local industries.

The transportation of freight containers that handle imports and exports could take the hardest hit, as 32.2 percent of the total 21,757 container carriers is assumed to belong to the cargo union.

The country’s biggest port in Busan could see a bigger impact from the strike, as some 20 to 30 percent of truckers there -- about 1,800 -- are affiliated with the labor union.

The government strongly condemned the protest, calling it a selfish act as the rail union has already been staging a strike for 14 days as of Monday. “The cargo union is abusing the situation for their own benefit. They are ignoring the nation’s economy and the citizens,” Lee Ki-gwon, the labor minister said.

As of Monday, more than 7,390 labor members from the rail labor union refused to work as part of the ongoing strike that started on Sept. 27, which shows 40.3 percent participation in the union.