[ The Korea Herald – Send E-mail ]
Typhoon death toll rises as restoration gets under way
By Jo He-rim
Published : Oct 6, 2016 - 17:08
Updated : Oct 6, 2016 - 18:09
Thousands of soldiers, public servants and relief workers were deployed Thursday to southern regions devastated by the most powerful typhoon to hit Korea in October.

With gusts of up to 56.5 meters per second, Typhoon Chaba ravaged southern parts of the Korean Peninsula on Wednesday, leaving at least seven dead and three others missing as of 1 p.m. Thursday.

The government, pledging swift restoration of the stricken areas, was considering designating them as special disaster zones, the industrial city of Ulsan in particular. 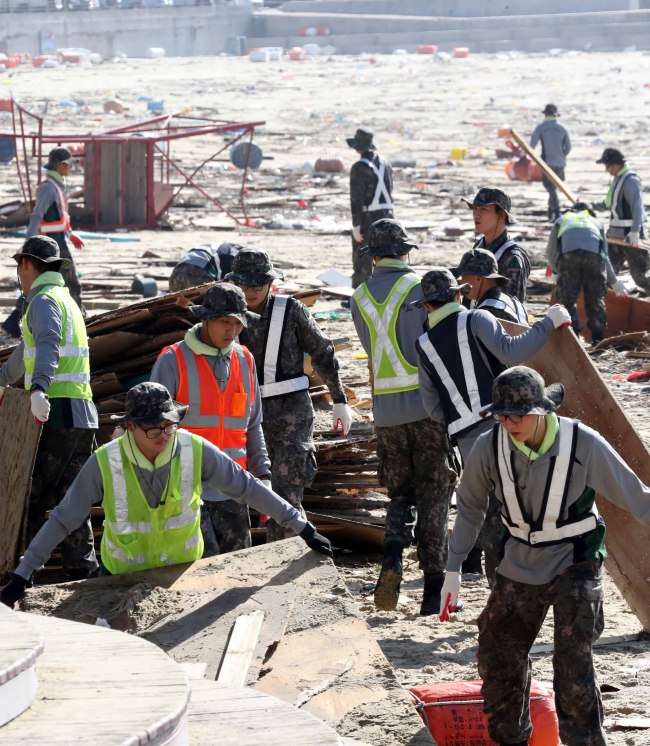 Soldiers from the Army 53rd Division are seen removing flood debris scattered by Chaba, the 18th typhoon this year, at Haeundae beach in Busan, Korea, Thursday. (Yonhap)
The head of nation’s communications body suggested plans to reduce the communication fee for those suffering from the storm damages. “We are already cutting the cost for quake victims in Gyeongju, North Gyeongsang Province, and the aid plan could be extended to the storm-hit regions,” said Choi Seong-jun, the chief of Korea Communications Commission.

The military sent troops for restoration work to the region as the government pledged to make best efforts to normalize the stricken areas. Help also came from local organizations, public workers and police in the hardest-hit cities such as Ulsan, where 4,000 people gathered to help clean up and restore the city.

Over 350 people from 175 households in the affected regions were evacuated to nearby school buildings and community centers as 522 houses were flooded, the Ministry of Public Safety and Security said.

The storm also waterlogged 7,747 hectares of farmland, damaging crops and fish farms, while over 4,300 cars were reported to have been caught in the floods or hit by debris, according to an association of general insurers.

The government will conduct a damage investigation from Thursday to Wednesday and come up with restoration plan until the end of the month.

Up to 120 millimeters more rain is expected from Friday night to Saturday morning in the southern region, the Korea Meteorological Administration said.