The on-month increase of 0.6 percent in overall consumer price level was the highest since January 2013. 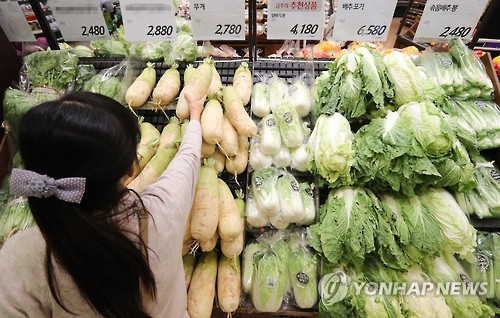 The upward change in consumer prices was backed by soaring prices for agricultural products such as vegetables, fruits and fish, which saw an average increase of 15.4 percent from a month earlier.

“The prices for fresh products soared because the record-breaking heat wave during the summer dampened the production,” said Woo Young-jae, director of the price statistics division at Statistics Korea.

Demand for the Chuseok holidays, which fell in mid-September, also pushed up vegetable prices, according to analysts.

The gains in agricultural products were offset by a drop in fuel prices in September. Oil prices have remained weak in the past several months and the South Korean government temporarily cut electricity bills from July to September amid public outrage against the country’s progressive rating system. The energy prices including electricity, gas and water in September declined 13.9 percent on-year.

The core measure excluding volatile fuel and agricultural products prices inched up 0.1 percent on monthly basis, recovering from a 0.3 percent decline in August.

South Korea has cut the inflation forecast twice since July.

The Bank of Korea’s inflation target has been an annual 2 percent for 2015-2018. But the central bank cut its forecast to 1.1 percent in July as the consumer price index remained tame or even decreased for several months.

On Tuesday, Lee Joo-yeol, governor of the Bank of Korea, further cut the forecast for inflation this year.

“Amid low oil price and temporarily cuts for electricity bills, the price level is expected to rise 1 percent this year,” Lee said.