"Since it is a significant case causing immense losses to investors, we will look into possible insider trading," Nam Chan-woo, an official at Korea Exchange, told The Korea Herald. "The investigation might take days, but we will come up with a result as soon as possible." 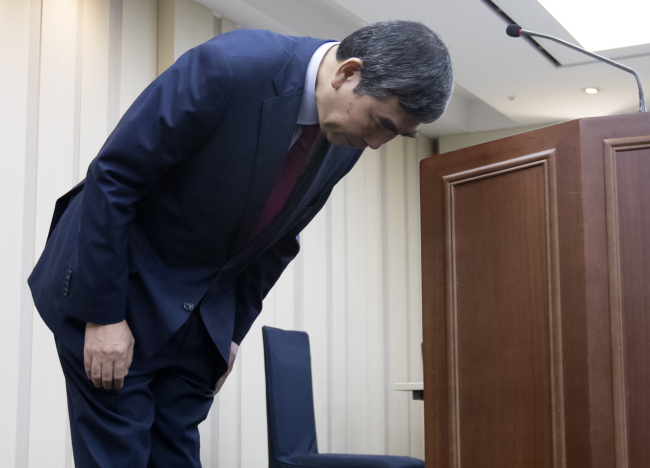 Hanmi Pharmaceutical CEO Lee Gwan-sun apologizes at an urgent press meeting held at the company`s headquarters in Seoul on Oct. 2.

The operator of the nation's main bourse has teamed up with the Financial Services Commission and Financial Supervisory Service for a thorough investigation into Hanmi Pharmaceutical, which has been under fire for causing damages on the late announcement of Boehringer Ingelheim leaving a partnership on a third-generation anti-cancer drug for lung cancer treatment Friday morning.

The unfavorable news came 29 minutes after the market opened, and after the firm’s stock price spiked nearly 5 percent on a disclosure made Thursday that the company clinched a 1 trillion won ($906 million) deal with Genentech, a member of Roche Group.

At the news of the departure of Boehringer Ingelheim, investors short-sold as many as 104,327 shares of the pharma company, recording the biggest short-selling volume since the company was listed on the Kospi in July 2010. Hanmi’s share price plummeted 18.06 percent to close at 508,000 won.

Allegations of insider trading are gaining grounds, as investors had suffered similar cases from the drugmaker in the past.

Last year, the firm was denounced for causing losses to investors by announcing the deal with Boehringer Ingelheim right before its poorer-than-expected performance in the second quarter was reported. A researcher at Hanmi was previously sentenced to jail time for making unfair profits by using the firm’s confidential information in a separate case.

“It is still difficult to say we are seeing a high possibility of insider trading, it is a ‘must’ (to investigate) in this kind of probe,” the official said.

Investors are erupting in fury at possible intentions by the company of protecting its stock price by disclosing the canceled contract belatedly.

The drugmaker has strongly denied the suspicion.

“We were officially notified of the termination at 7:06 p.m. on Thursday,” said Kim Jae-sik, a vice president of Hanmi, at an emergency press conference held Sunday. “Since we made the disclosure about the Genentech deal at 4:30 p.m. on that day, we thought there could be some confusion in the market.”

Listed firms are required to upload new announcements or corrections on the Data Analysis, Retrieval and Transfer System run by the FSS. Then, Korea Exchange officials review the uploaded information and approve disclosures. After the stock market is closed or in the evening, KRX officials on duty are assigned for approval.

However, Hanmi didn’t follow the usual rules for making disclosures.

“Because the case was making a correction about last year’s deal, which gets a thorough examination by KRX, we judged that it would be better to meet an official in person who knows well about the contract. So, we visited the KRX headquarters at around 8:30 a.m. the next day.”

“We apologize for the delay, and there was no other reason,” Kim added.

KRX will inspect whether the company violated rules for fair disclosure or not.

“When there is a major change in a previous announcement, the rule is to notify the KRX of the change immediately,” a KRX official said.