Clad in a black jacket and skirt with neatly combed hair, she was to attend a 30-minute job interview for a Korean-run company in New Zealand in the afternoon. The 24-year-old hoped that the interview would lead to the end of a year of unemployment. 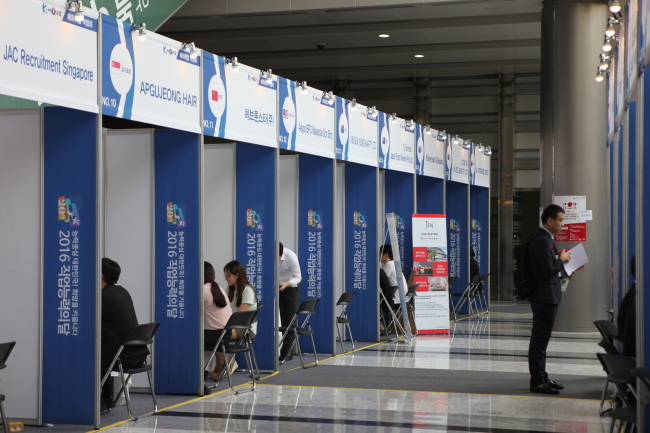 Job seekers speak with recruitment representatives at the K-Move Overseas job fair in Seoul. (Park Ga-young/The Korea Herald)
“I hope I stand a better chance abroad,” Jung told the Korea Herald after the interview on Sept. 6. A graduate from a four-year university in Busan, she spent almost a year studying English in Canada.

If successful, she would be working in New Zealand for the Korean businessman who is seeking to expand his food and beverage business there.

The company was one of 17 employers participating in Korean government-backed K-Move Overseas Job Fair organized by Human Resource Development Service of Korea.

Jung fits one of two typical profiles of job seekers turning their eyes abroad -- a female graduate of a lesser-known university from outside Seoul.

And it also represents the most marginalized group in Korea’s job market for college graduates. They are also the ones taking the heaviest hit from the local economy’s slowdown.

Korea’s youth jobless rate soared to 9.3 percent last month, a record high for the month of August. Long-term unemployment – joblessness lasting over 6 months like Jung -- is approaching a level last seen in the height of the biggest economic crisis in Korea in the late 1990s.

“There are few jobs to apply for in Busan, and even fewer high quality openings,” Jung said.

A veteran career expert at a Seoul-based university is an eyewitness to the deterioration in the country’s job market for fresh graduates.

“The job market has gotten worse in terms of size and quality in recent years. That’s for sure,” she said.

“Under such circumstances, female job seekers face more difficulties as some companies still shun them, citing the higher employment costs, such as maternity leave.”

According to the HDR Korea, 55 percent of those who found employment in foreign countries last year were women -- 1,605 out of the total 2,903. The actual size of overseas employment is believed to be higher than the HRD tally.

In Korea, the university ranking is a major factor determining one’s chances at getting a job or the quality of jobs he or she will be getting. But the school’s name value doesn’t mean much for overseas employers, he explained.

Fed up with Korean work culture

Among Jung’s competitors for the New Zealand firm was Shin Mi-ran, a 29-year-old designer who graduated from one of Seoul’s top schools.

Shin, who wished to use a pseudonym because she was still employed, represents another set of job seekers turning overseas.

She has a well-paying job at a design company but wants to escape “hell Joseon,” a satirical expression used by young Koreans to describe the country’s socioeconomic conditions – including the world’s highest suicide rate, low birthrate and soaring youth unemployment. Joseon is the name of Korea’s last dynasty.

“I want some balance between work and life but it seems to be impossible with frequent overtime work (in South Korea),” Shin said. “Furthermore, I feel I have hit the glass ceiling at work and I am the only female on my team.”

Data from the Organization for Economic Development and Cooperation reveals that South Korea’s working environment is one of the toughest.

The country has the longest working hours only after Mexico. Its gender wage disparity is also the widest among 36 member states, with women earning 36.7 percent less than their male counterparts as of 2014.

Moon Jae-woo, 28, was one of the lucky ones who landed a job in Singapore. But he flew back to Seoul earlier this week, ending his overseas career that began in November 2015.

“I originally planned to work in Singapore longer and I even paid 3.5 million won in fees to a famous job agency,” said Moon.

Moon, a graduate from a Seoul university with a degree in electronic engineering, worked as a bellboy at a hotel in Singapore.

He thought doing a bellboy job in an English-speaking country was better than not working at all in Korea. It would help him improve his English at least, while bringing in some money. But his English has not improved as much as he expected and he had to struggle to make ends meet.

The Korean government has also been encouraging them to broaden their search to outside Korea.

In 2008, it launched an initiative to assist Korean youth’s global job searches, with a goal of sending a total of 100,000 young people abroad via internships, volunteer opportunities and permanent employment between 2009 and 2013.

The government allocated billions of won every year and various ministries and government agencies ran dozens of programs.

The efforts, however, bore little fruit.

Overseas internships, in the vast majority of cases, failed to lead to a regular job and many of those who were successful in getting regular employment were in low-paying, menial employment.

Amid such criticism, the Park Geun-hye administration eliminated most of the internship programs and merged them into HRD’s K-move program in late 2013.

Lee of HRD explained that K-Move now puts a greater focus on the quality of jobs and credentials of employers.

“We want our young generations land a good quality job overseas,” he stressed.

Moon, the former bellboy, is not skeptical about overseas employment, particularly as finding a job here is so tough.

“I believe my experience in Singapore may increase my chances of finding a job here. If it doesn’t, I may try another foreign country for a job.”

Neither Jung and Shin got the New Zealand job, the two informed this paper last week.