[ The Korea Herald – Send E-mail ]
[Eye Interview] ‘We create experience, not just the physical space’
Interior designer Mary Spackman feels the need to get better each time client returns
By Rumy Doo
Published : Sep 23, 2016 - 16:35
Updated : Sep 23, 2016 - 16:35
Imagine having to outdo yourself each time you take on a new project. “It’s like having to hit a home run again and again,” said Mary Spackman, founder and principal designer at Spackman Associates.

While the name may be unfamiliar to most, it is a go-to name for those in the know. The interior designer who returned from the US after working for four years at the New York-based Rockwell Group was taking time off raising her young son when she was approached to renovate the home of a CEO. That project led to another and then another and one day she found herself being asked to design the Haevichi Resort on Jeju-Island in the summer of 2002.

Spackman, also known by her Korean name Choi Kyung-hee, who had until then been working as a freelancer on a number of high-end residences, scrambled to rent office space and hire a staff of two for the project. Thus began a career that has since then seen her work with major corporations including Samyang Corporation, Naver, AmorePacific, and Hyundai Card. 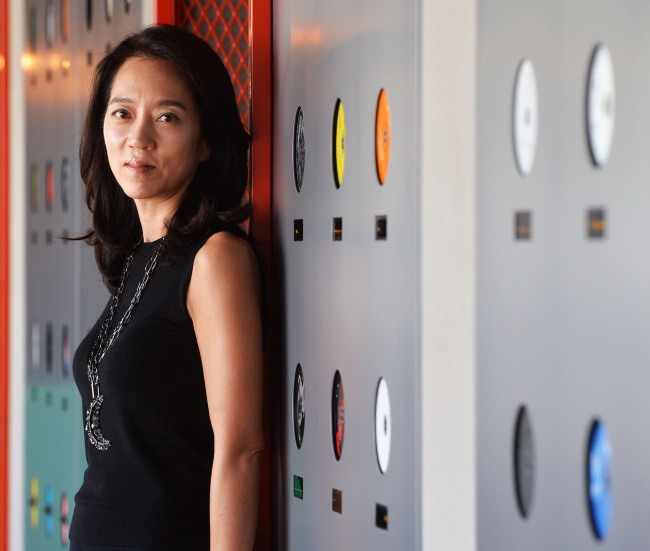 Mary Spackman, founder and principal designer of Spackman Associates, poses inside Vinyl & Plastic located in Yongsan-gu, Seoul. (Yoon Byung-chan/The Korea Herald)
Spackman claims to have no favorite projects. “I don’t really have a favorite. The most recent are the favorites,” she said. Yet, her enthusiasm while giving a tour of Vinyl & Plastic on Itaewon-ro Monday suggested that this unique culture and retail space could be her favorite.

Pressed on the point, Spackman admitted to her bias. “This was my dream project because it was so much fun doing it,” she said. The two above-ground floors and one underground floor took 4 1/2 months to design –- not just the space inside but virtually everything that fills the space as well as the exterior.

Hyundai Card, with whom Spackman Associates enjoys a 14-year relationship, approached Spackman with a unique request: The client wanted a cultural destination that was at the same time also a retail space. It also wanted the new space, which would be open to everyone, to have a link to Music Library next door, a music space accessible only to Hyundai Card holders and their guests. Opened earlier this year, Vinyl & Plastic is the first of the finance company’s cultural spaces to be open to the general public.

“We create experience, not just the physical space. We think about how to make it look attractive, the visual impact as well as personality,” Spackman said of an interior designer’s role. “I like giving space layers of meaning so there is a sense of discovery and something that strikes an emotional chord,” she said. 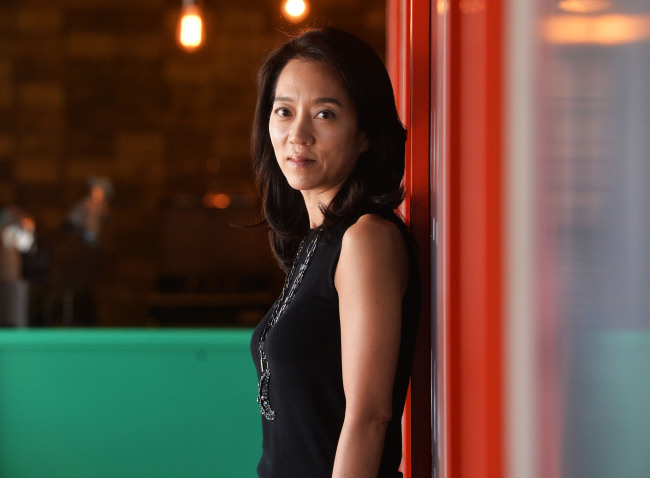 Mary Spackman, founder and principal designer of Spackman Associates, poses inside Vinyl & Plastic located in Yongsan-gu, Seoul. (Yoon Byung-chan/The Korea Herald)
With meticulous attention to detail, Spackman came up with ergonomically designed display cases, created prototypes for trial and had them custom made. The display cases form an integral part of the experience at Vinyl & Plastic which houses 9,000 LPs and 16,000 CDs. Strategically placed sensory speakers are an element of surprise that also function to give aural clue to what kind of music is displayed in that particular area.

Pointing to the second-floor balcony area with a long table that looks out to the street, Spackman explains how that space was designed with couples in mind. “It is secluded, away from the retail space and couples can sit next to each other and share music,” she said.

Vinyl & Plastic has a distinctly vintage industrial look with its exposed beams, rough concrete texture and the ’50s and ’60s factory lights. The rough wooden crates and the long wooden tables all add to the analog experience associated with LPs. In fact, for many Vinyl & Plastic visitors who are used to streaming or downloading music, it may be their first time listening to LPs. 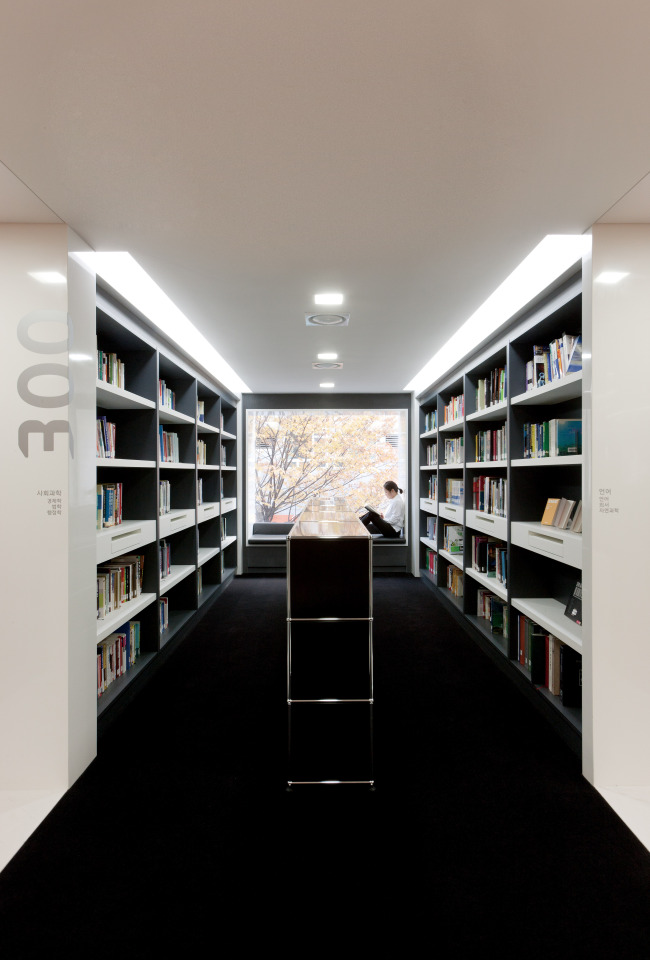 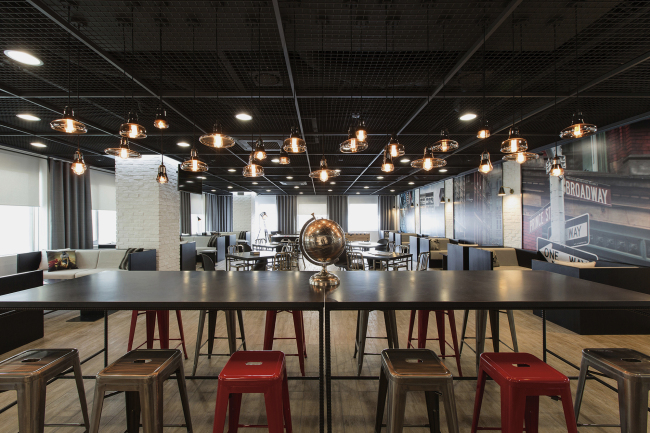 A lounge at the Hyundai Card Call Center in Dongjak-gu, Seoul (Spackman Associates) 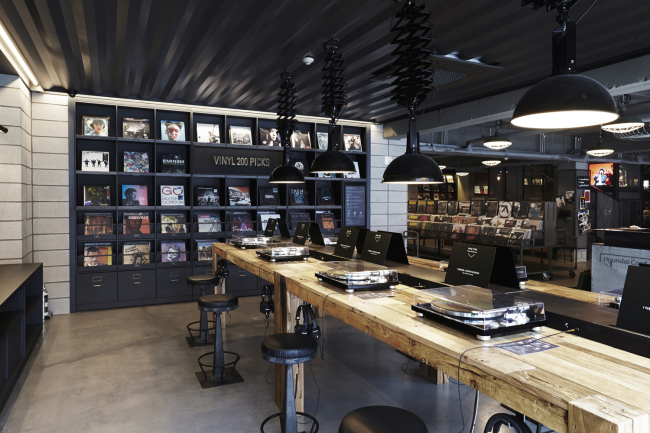 The interior of Vinyl & Plastic in Yongsan-gu, Seoul (Spackman Associates) 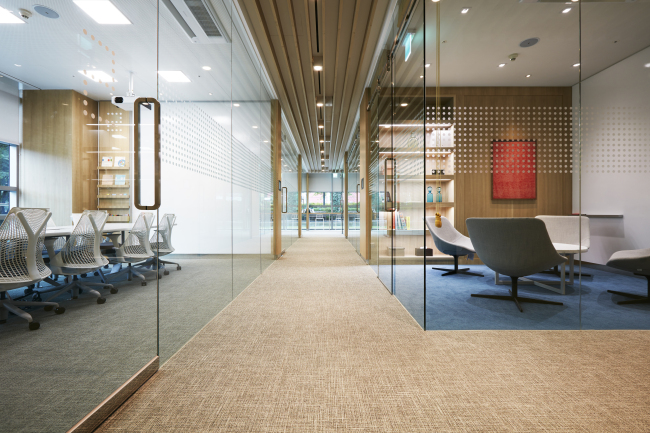 Reception/meeting rooms at the Samyang Corp. headquarters building in Jongno-gu, Seoul (Spackman Associates)
Interior design is very much a collaborative work, a lively exchange of ideas between the client and the designer. And when the two partners work well together, the outcome can be a pleasant surprise. The electric guitars that hang on the wall in the cafe section were Hyundai Card CEO Chung Tae-young’s idea, Spackman explained. Together with the long, uninterrupted bar and high stools, the colorful electric guitars add to the ’60s vibe of the space. Chung also brought in a 30-year-old street artist Aakash Nihalani from New York to work on the building’s façade. “It was a truly collaborative project,” recalled Spackman.

Such close collaboration is possible because of the long-standing ties between Spackman Associates and its major clients and the trust implicit in such ties. Spackman heads a staff of 10, working as a head designer for all the project the firm takes on. Due to the size of the operation and Spackman’s very hands-on approach, there are a maximum of three projects going on concurrently at any given time.

“Our projects usually come through client referrals,” said Spackman, adding that many of her clients are return clients with whom she has worked on more than two projects. Of her long relationship with Hyundai Card, Spackman said, “It is a great compliment for me.” Vinyl & Plastic is Spackman Associates’ fourth Hyundai Card building.

Spackman’s work with Hyundai Card began with its CEO Chung asking her to redesign a conference room on a shoestring budget. Next came a request to design the employee cafeteria in 2003. The company was not doing very well at the time and Chung wanted to breathe fresh air into the company, Spackman explained. Working with a small budget, she came up with the idea of decorating the walls with photos of executives and employees. “You had an executive wearing a pink wig for the photo shoot. People really enjoyed it,” she recalled. Chung must have liked it too – she would go onto design the company’s two headquarter buildings.

While Spackman takes it as a great compliment and an acknowledgement of her outstanding work that many of her clients return, she said that it is also great pressure. “It is important that we get better because when they return, expectations are higher,” she said.