An honored citizen is one who was killed or wounded for a righteous cause such as attempting to prevent loss of life or damage to assets outside of one’s professional liability. 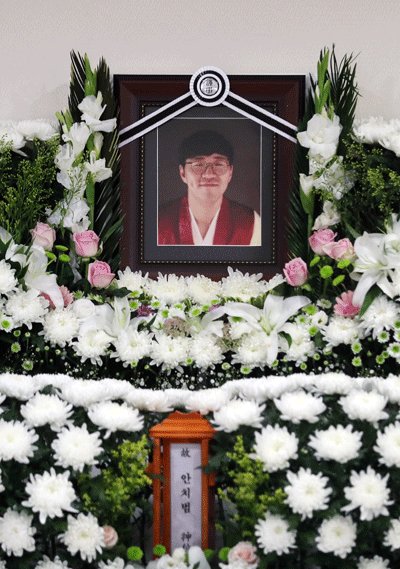 (Yonhap)
Lee Jung-hyun, chairman of the ruling Saenuri party, visited the funeral house in Seoul on Thursday and proposed the deceased’s designation as an honored citizen.

The proposal will be reviewed by a committee under the Ministry of Health and Welfare.

On discovering a fire in a studio apartment block on Sept. 9, Ahn called the fire department for help and re-entered the burning building in Seogyo-dong, Mapo-gu, to alert those inside them to the danger.

He lost consciousness from smoke inhalation and passed away 10 days later on Tuesday.

Ahn’s neighbors attested to having been alerted of the fire by someone ringing their doorbells and shouting for evacuation.

He was found on the staircase leading to the fifth floor rooftop with burns on his hands.

Police in Mapo-gu said the fire started from a studio flat on third floor by a man in his 20s who was enraged by his cohabiting lover’s request to end their relationship.

Apart from Ahn, there was no other casualties.

Ahn’s bereaved family reportedly expressed both sadness and pride at the circumstances surrounding his death.