Hyundai Motor said Monday it would launch taxi and car-sharing businesses with its hydrogen powered cars in the nation, a move which came a month after the government set up a control tower to boost the growth of eco-friendly cars. 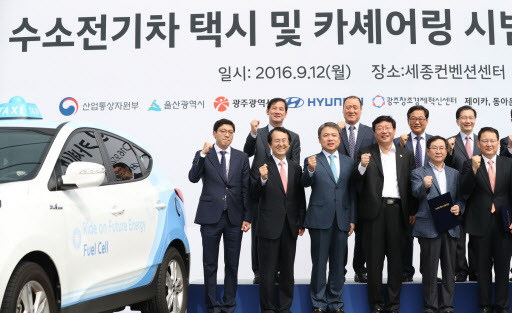 (Yonhap)
The automaker said it plans to start its pilot taxi business with the 10 Tucson Fuel Cell in Ulsan, a city in the southeast of the country, by the end of this year. It will then add 10 more cars in the city as well as Gwangju in southern Korea by the first half of next year.

The business will expand across the nation in 2018 when the automaker’s new hydrogen fuel-cell car is launched. A total of 100 taxis will be operated in five cities, Hyundai said.

“We hope the public can experience the eco-friendliness and the safety of hydrogen fuel-cell cars more closely,” Hyundai Motor’s chief Chung Jin-haeng said.

Hydrogen fuel-cell cars, which require less charging time and travel longer distances on a single charge than electric cars, are currently not a common sight here because of the lack of charging stations and government support.

Trade Minister Joo Hyung-hwan said, “Hydrogen powered cars are emerging as an alternative to environmental issues such as gas emissions and fine dust. … Korea should have a competitive edge in the area.”

Apart from the taxi business, Hyundai is also to start a car sharing business with eco-friendly cars from the end of this year in partnership with local startup J’car.

“Hyundai started the taxi and car-sharing business first because hydrogen fuel-cell cars are still too burdensome for individual consumers because of the high cost and the lack of charging stations,” Kim Pil-soo, an automotive engineering professor at Daelim University, told The Korea Herald.

“The pilot business will serve as a testbed for Hyundai before it ships the new eco-friendly cars to the global market,” he added.