With two big biennale events -- the Gwangju Biennale and Busan Biennale -- kicking off last week, major Korean museums and galleries have opened a plethora of exhibitions to attract the influx of international art professionals and local art lovers.

Some of the more notable exhibitions are taking place in the tranquil art district of Samcheong-dong near Gyeongbokgung and the National Museum of Modern and Contemporary Art, Korea. 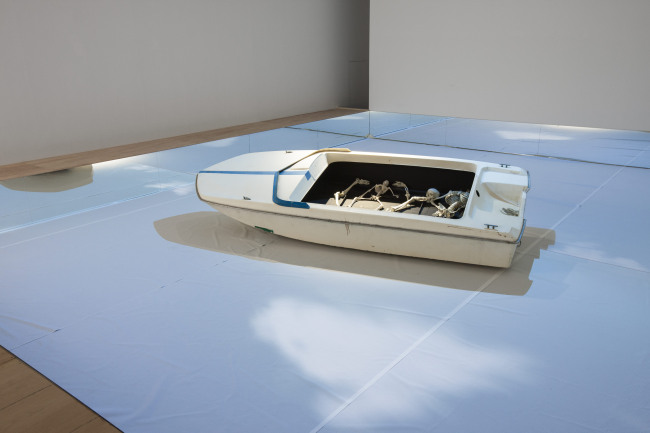 “Yin and Yang 15 S 45” by Kim Ku-lim (Arario Gallery)
One of the earlier shows that signaled the exciting culture season is the solo exhibition of veteran avant-garde artist Kim Ku-lim at Arario Gallery. The 80-year-old artist presents seven new sculptures, installations and a video work that the artist said reflect the current contemporary society and his belief that “art should evolve with changes in society and the world.”

The show, titled “Traces of Life and Death,” deals with the perilous journey taken by Syrian refugees and the recent murders involving young children in Korea. On the basement floor, human skeleton models are place inside a small wooden boat, contrasting starkly with the bright sky image that surrounds the boat. 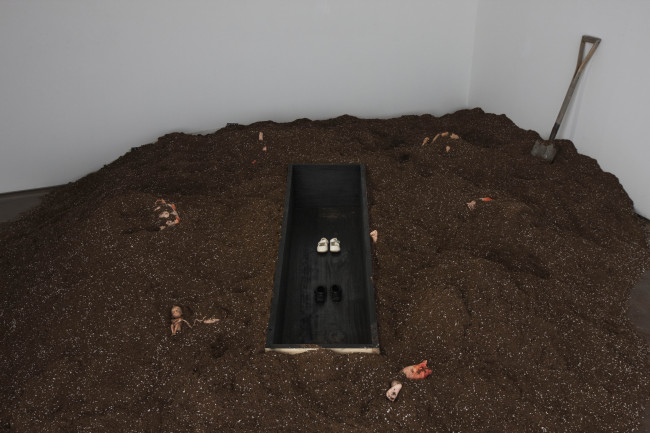 “Yin and Yang 16 S 55,” by Kim Ku-lim (Arario Gallery)
He continues to talk about tragedies he observed in modern Korean society, filling the first floor exhibition space with soil, a coffin and two pairs of children’s shoes inside the coffin.

“How has the world become like this where parents neglect their child in the bathroom until he dies in there,” said Kim, referring to a recent tragic child abuse case in Korea. The exhibition runs until Oct. 16. 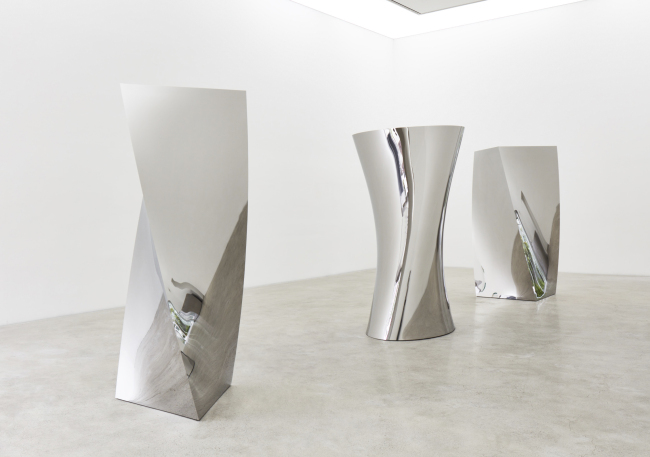 The exhibition includes a series of his new “twist” stainless steel sculptures with polished surface. The twisted rectangular blocks of stainless steel glisten in a white cube, making viewers feel as though they are stepping into a spiritual space. 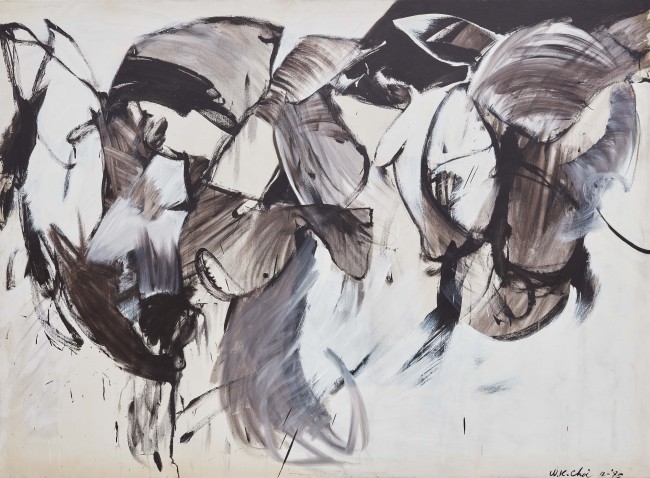 “This is What You See” by Choi Wook-kyung (Kukje Gallery)
The gallery is also hosting a solo exhibition of Korean abstract painter Choi Wook-kyung featuring some 70 paintings that span 15 years of her art career, from 1963 to 1978, when she was living in the US. The gallery explores the works of the little-known abstract painter who died unexpectedly from a heart attack at the age of 45 in 1985, shedding light on the artist’s unique standing in the Korean art world. Choi developed her own style and strived to be independent from the mainstream art movements of Korea, such as Danseakhwa, or Korean monochrome paintings. The exhibitions of Anish Kapoor and Choi Wook-kyung run until Oct. 30.

“Painting,” by Shin Sung-hy (Gallery Hyundai)
Abstract paintings by another little-known artist, Shin Sung-hy, are being shown at Gallery Hyundai until Sept. 18. The exhibition features the artist’s early paintings that span from the mid-1970s to the 1980s. Using burlap fabric as canvases, Shin applied paints along the surface patterns of the burlap canvas, highlighting the material and its patterns.

The National Museum of Modern and Contemporary Art, Korea presents its annual Artist of the Year exhibition, introducing four mid-career artists and teams until Jan. 15, 2017. 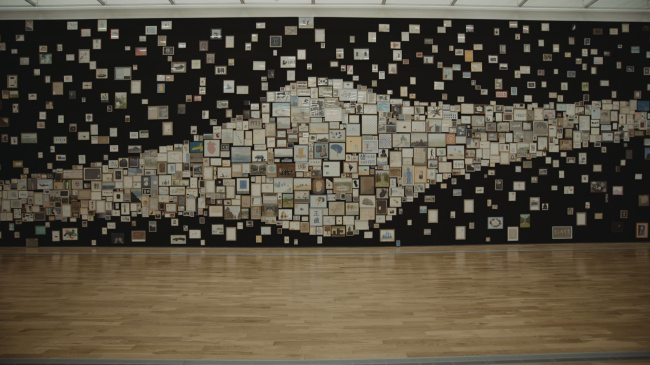 “Galaxy” by Kim Eull (MMCA)
Jewelry designer-turned-artist Kim Eull filled an entire wall of the museum’s gallery 1 with a total of 1,450 small paintings, aligning them to form a galaxy in the universe.

“I started drawing everyday as I gradually got sick of working with serious topics. Drawing became a natural habit and then I wanted to make a huge self-portrait of myself which reflects my thoughts,” said Kim. 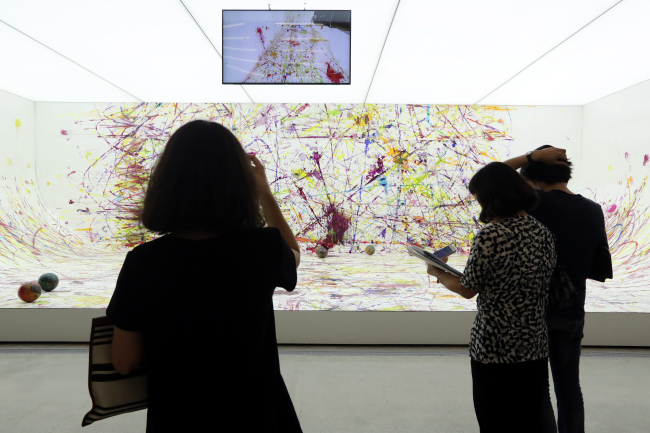 Visitors view “Soccer Painting by the Soccer Ball Bouncing Over Crocodile River” by Ham Kyung-ah. (Yonhap)
Ham Kyung-ah, known for her embroidered painting project crafted by North Korean embroidery workers, is presenting her unrealized project that involves North Korean defectors and their journey of escape from the North to the South. The project, which initially sponsored defection of a North Korean, was terminated, incomplete, under volatile circumstances. Instead, Ham plays audio records captured during the journey of the North Korean defector and a Chinese broker.

For her new drawing-installation project, she worked with an 11-year-old boy who defected from North Korea at the age of 9. She invited the boy to play with a brightly painted soccer ball inside a white box and filmed the scene to screen it inside the exhibition space along with an interview of the young soccer player.